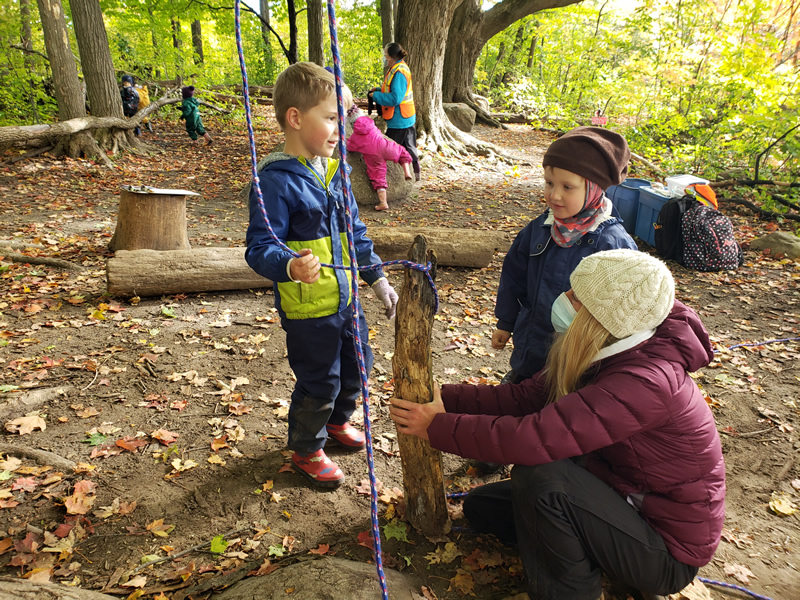 Today, in the forest, I was working with some of my kindergarten friends as they were sharing plans, ideas and methods for creating a rope swing when I bore witness to what just may be my favourite exchange between children with regards to forest school and what it means to children and their development and how they view their experiences in the woods.  I have spent countless hours in the woods as a Forest School Practitioner over the past six years and I strongly believe in the benefits of forest school with regards to holistic development.  Today, the children taught me what I already suspected. That they are feeling the way I do in nature, that the forest truly is their playground.

Our morning began with the children casually climbing a large boulder, sitting on their bottoms and then sliding down, each having a turn as they noticed the last one’s attempt.  “We have a slide!” and  “I’m sliding!” could be heard gleefully escaping their mouths, accompanied by giggles and laughter.  As the children dispersed and began to delve into their morning projects, the ropes became a main focus for almost all of them.  One group of children decided to go “fishing” with their ropes.   They worked together to wrangle rainbow fish and even a rainbow shark, taking turns pulling on the rope or waiting for something to bite.

The small group of children that I was observing were working together to create a rope swing.  They were taking turns trying to throw a rope over a large tree branch without much success in the beginning.  Two boys exchanged ideas about how best to get the rope over the branch and they tested each theory which included, taking turns with friends to throw the rope,  standing on the roots of the tree to be closer to the high branch, putting a loop in the end of the  rope and, once the rope was thrown high enough to get stuck on the branch, using a stick to pull it the rest of the way over. The next steps would include tying a piece of wood they had set aside to the ends of the rope to create a seat for the swing.  After a few failed attempts and adjustments, the seat was secure.  There was, however, one problem. It was just sitting there on the ground…the rope was too long.  The children tried lifting it, only to see it fall right back down. It would have to be untied and then adjusted once again.   While the children were slightly disappointed, they were not discouraged.  They faced the challenge head on.  And THAT is when the conversation occurred.  The conversation that showed me how the children feel in forest school, how they view their forest.

While untying the wooden seat swing, one of our determined swing builders glanced over at the boulder and said: “When I’m done making the swing, I’m going to go on the slide.”  His eyes lit up and he smiled as he realized something just before he verbalized it:  “Our forest is just like a park!  We have a slide, we have things to climb on and we have a swing.”  I was so excited to hear this reference and even more so to hear the other children chime in with their recognition of this as well.  “Ya, we can climb on the logs and balance”, “Ya, the rock is a slide”.  Our swing builder looked around and pointed out all of the things that they had there for climbing and balancing including fallen branches, tall stumps and old logs.    He mentioned that “We aren’t allowed to go to our normal park right now but we can play at this one.”  We talked about how the pandemic had created park closures before discussing how lucky we are to have the forest as our playground.  A playground that is ours to build, recreate, enjoy and care for.  I thought about this later.  I thought about how important forest school is to these children right now more than ever.  I thought about how these children are the lucky ones who have a playground that they can still enjoy.  Mostly, though, I thought about  how much learning happens in a single child initiated and child lead experience that actually enables them to create the playgrounds that they desire and so deserve.