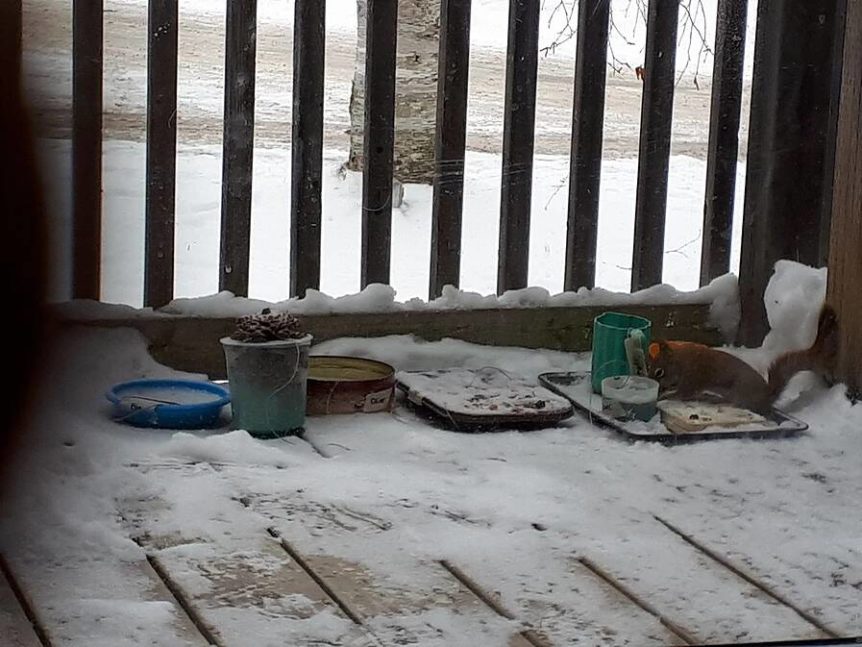 Our return to the forest after the Christmas holiday not only brought us a brand new year but also some rather chilly, wintry weather. While the snow didn’t come right away, the cold temperatures had us bundled up for our latest explorations of the woods. We had to take the long way to the forest as there was ice on every surface we came across. Upon entering our meeting area, we noticed that ice had found our forest as well. While it was safe to explore, we needed to be mindful of some areas.  We noticed that someone had built a shelter in our space but the ice beneath it made it unsafe to play in. JW and RM decided that the ice was something they could experiment with as they started using rocks and bricks they had found to try to break it. They dropped them and banged the ice, making only small chips in it. It was tough!

They then decided that using more force was necessary so they took turns throwing the heavy objects down onto the ice.  They were careful to make sure no one was is in the way with each toss as their friends came to join in and they were mindful of the chips of ice that came flying off. JW used the boulder to drop his brick off of, but the ice proved too strong to crack completely!

Finally, a couple of days later, the snow came!  The fresh layer of cold fluffiness covered everything and it just kept coming down.  It offered us a safe landing pad as we made our way along slippery logs, flipped and flopped upside down over logs, turned our boulder into a slippery slide.

The snow also offered us traction as we worked away in the forest, building a “camp fire” which HGC, HHW and RM worked tirelessly together for a good part of the morning, searching for, moving and arranging sticks and branches to make the fire “just right”.

We were so glad to have the snow back to enjoy and the falling flakes made the forest seem so majestic as we went for a walk through the trails in search of animal evidence.

It wasn’t long before we found what we were in search of. This time it was animal evidence in the form of a tunnel! We noticed that something tiny had been moving beneath the snow. The tunnel ended near a pile of branches which lead us to believe that this pile was his destination and maybe where the small creature had hunkered down to be warm during the snowstorm we were having.

Some small animals that we guessed it might be included: a mouse, a mole, a shrew or a chipmunk. We didn’t get to see him but we were excited to know that he was there! We were also surprised to notice all of the fungus on some of the tree trunks around that we hadn’t noticed before and we are starting to wonder why it is there and how it got there!

We may have some further investigating to do about this!

Back at our site, RM got to work making a structure of a small size.  He worked all morning at this and, when asked what he had built, he said “a mouse house”.  Maybe the animal that was leaving tunnels all around site would find refuge there during the cold night that sure lay ahead.

Back at the centre, we got back into investigating tracks and practicing our animal track identification skills.  We got out our animal track stamps and made the marks of animals all over our paper, guessing by what we remembered which animals would leave which tracks behind. We also tried out a new Animal Track Matching Game!  Did you know that raccoon tracks look a little bit like human hand tracks?

We also compared the stamps with our animal track ID charts and some track moulds as we took a very close look at them with our magnifiers!

The cold, wintry weather was the perfect backdrop for a new story. Chelsa read us “The mitten” by Jan Brett. We loved seeing all of the familiar forest animals squeeze into the the lost mitten to keep warm. As each animal did so, we helped to place some animal cut outs into a real mitten along with the story. Afterwards, we excitedly took turns reading the book ourselves with our friends, placing each animal into the mitten with each turn of the page.

This story has been told since in many different ways by many different friends, sharing their words, actions and ideas with one another along the way.

Outside, we were so excited to finally have our skating rink ready!  We had been watching it develop over the previous weeks, seeing the water, asking many questions about when it would be ready, how the ice would be made and what is involved in making ice hard enough to skate on.  We learned all about cold air freezing the water into ice and how the temperature had to remain cold in order for the ice to stay. We hopped into our skates, some of us for the very first time ever, and off we went! We were elated by the idea of skating outside with our friends and so proud of our every effort to stay on our feet above the blades and the slippery ice surface. Those of us who didn’t skate decided to make some tracks of our own in the form of snow angels.

Our next trip to the woods had us with our “owl eyes” wide open in search of more animal evidence. We had talked about different ways to know an animal may have been around while we we were not and our watchful eyes found all sorts of things to tell us who had been around in the forest before we got there.  The first tell tale sign we came across was pee! Yellow snow told us it was pee and, when we got down low to look, the toed paw print with nails told us that the pee had been left by a dog!

We followed the dog tracks along the trail and, as we did, we came across a few other signs of animal activity.  We found squirrel tracks, bunny poop, bunny tracks, squirrel nests up in the trees, fresh holes in the trees made by woodpeckers and some scuffled tracks that had us curious.

We were proud of all of our investigative skills and decided to celebrate our finds by sledding on the hill nearby!  We had anticipated perfect sledding weather and brought our crazy along with us and we were soooo glad we did!

A polar vortex rolled into the area bringing with it extreme cold warnings which meant outdoor explorations were impossible.  Being stuck indoors, we decided to get creative and use Mother Nature to help us make something special. We used different sized containers, coloured water, seeds and other nature items.  Each of us made our own special creation of watery awesomeness before placing them all outside. We knew (from our ice rink) that the cold air outside would turn our creations to ice so we placed them outside and, before too long, our ice sun catchers and ice bird feeders were ready!  It was too cold outside to hang them in our trees so that would have to wait for another day.

The following day, while we were eating out lunch, we learned that our feeders, while not yet hung up, were appreciated by someone. While we ate inside our warm classroom, a little red squirrel made his way to our feeders outside the door and entertained us as he snacked on the seeds he discovered within them!

We knew all about how ice was made so, after lunch that day, we brought some into the classroom to learn about how it turns back into water! Armed with salt, food colour, shovels and eye droppers, we explored the ice blocks, noticing how the salt helped to melt the ice into water and finding the cracks in the ice as the colour we added moved along them.

We noticed that Lisa had frozen some toy bugs and spiders into the ice and started coming up with ways to get them out. Throughout the course of the day, we managed by adding water, chiseling and waiting to get the bugs out of their ice enclosures, cheering as each one was removed!

That polar vortex decided to stick around for quite some time.  We managed to get outside for some snow fresh air fun here and there but our time out in the cold weather was limited.  We kept busy indoors with snow and colour in our sensory table, making more bird bread for our forest friends, stories and songs at circle time and lots of creative games and contests with our large blocks.

We looked up animal tracks on our tablet and tried to figure out, from photos, who had made the tunnels in our forest. With the beginning of February came the promise of the end of the polar vortex and we really, really can’t wait to get back to our favourite place in the woods.