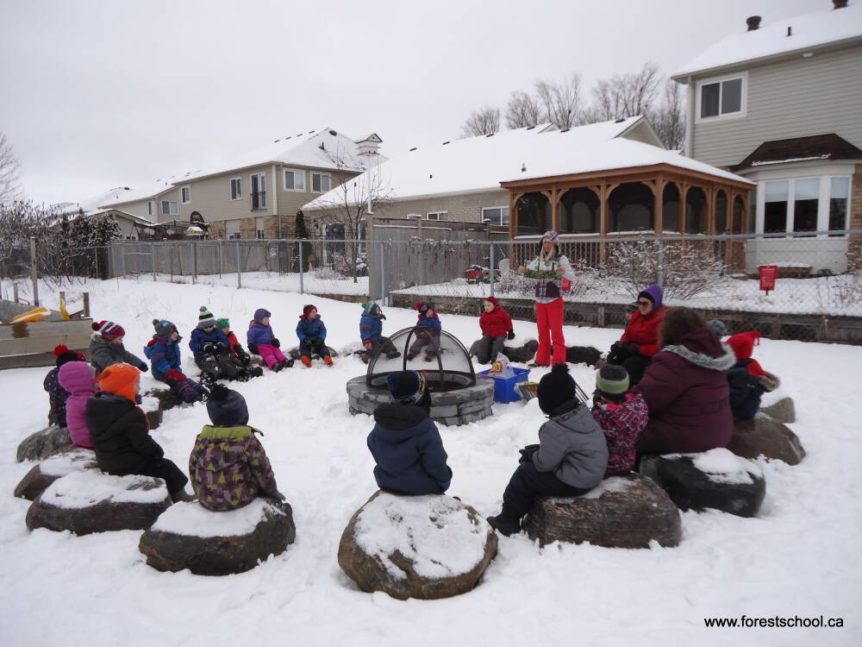 A winter storm blew through over the weekend and into Monday bringing with it snow, freezing rain, ice and wind.  The weather made getting anywhere next to impossible which meant we had to miss our morning in the forest. By the time Wednesday rolled around, our whole region resembled January as opposed to the middle of April!  Being used to the cold and the snow, we were happy to throw on our snowsuits again and were greeted with a surprise. Since the weather made it feel like winter, our teachers thought it would be fun to have a bonfire in our fire pit in the Nature Classroom!  We were so excited! Outside, we gathered around the fire pit to share what we remember about being safe around the fire together. We impressed our teachers with how much we remembered before we shared a story by the fire.

We could hear a LOT of birds around and we stopped to guess what we could hear. One sound was very obvious to us.  It was the pecking of a woodpecker not far off. Again, we wondered if it was the pileated woodpecker from the other day. We weren’t rewarded with the sight of him, although we tried to look, but we did get to listen to him peck away at the trees nearby for quite some time while we discussed its reasons for the racket. “He is pecking the tree to get the bugs out” said G.  When asked why, he replied “Because he eats them. The bugs live in the tree.”

We had some time to explore  while we waited for the fire to be ready for roasting marshmallows so we went off to see what we would discover.  R, J, N and O had the idea of using the sticky snow to build a snowman and began rolling the snow into balls. When the work got a little too heavy, they called on Michelle for a little more muscle. They worked together to roll, shape and lift their snowballs into the shape a very large snowman!

R wanted it to have a hat so one was added with the help of Michelle who was the only one who could reach that high. Lisa helped too. She helped to get the pieces of bark we had found to stick into the head to make the facial features. When it was done, it was massive and it was perfect!

C discovered a ton of tracks in the snow behind the skating rink.  They went in every direction and had a lot of pee and poop near them. Her friends came to check it out and we they wondered why the bird was walking and not flying.  As they made their way around the ice rink, they discovered some robins on the other side of the fence. Together, we counted seven of them. They were fat and the children guessed that maybe they were having babies.  Seeing all of the robins on the ground, they guessed that that was how the prints they had seen got there. Seeing them eat the sumac gave the children the idea of why they were there. Our skating rink has many sumacs around it and that’s probably why the birds were there.

R discovered some holes in the snow beneath the pear tree.   She wondered how they got there before examining the tree more closely.  She noticed that there were tiny drops of water on it where snow was melting.  As she shook the tree, she watched as the drops fell to the ground, leaving new holes in the snow.  She delighted in solving this mini mystery and enjoyed showing her friends what she had discovered.

The fire was finally ready and we flocked to it to smell the smoke that it made.  We waited patiently for our turns to roast marshmallows and chatted with our friends and teachers.  The marshmallows were deliciously warm and gooey and worth every second of the wait! A few caught on fire but we remembered to let them burn out and fall off of our forks so we could start over again.

Smelling like a smokey fire and bellied filled with sticky marshmallow, we headed back off to play. This time, we worked at climbing, jumping and balance as we made our way up and onto the new logs the yard and then practised jumping from one to another.  With some practise, we were able to jump the distance from the smaller log to the larger log without falling off!

The mild morning was gone before we knew it and it was soon time for lunch. Wintery spring days really aren’t so bad at all!

Friday morning was another snow covered day.  We were supposed to celebrate Earth Day by cleaning up the garbage in our forest but the snow was covering everything, including the garbage.  We decided to wait until the snow melts but shared a special story about how picking up a small bit of litter helps the earth in big ways called “What Matters” by Allison Hughes and Holly Hatam.  This story helped us understand how helpful we can be and got us excited about our forest cleanup together.

As we moved around the forest exploring, our morning activities lead us in some lasting activities which took us through the whole morning.  J wanted to make a rope swing and worked to find the rope he needed to do so. After a few attempts at throwing the rope over the tree branch, he started to get a little frustrated.  Some of his friends had begun to gather around and the teachers suggested that maybe they could help. Z eagerly took the rope and took turn after turn trying to get the rope up and over the branch with no luck. R came to lend a hand as well and he and Z took turns trying to get the rope where they wanted it to be.  J returned and gave it another a try and a few other friends offered to help as well.

In the end, it was Z who finally go the rope onto the tree branch but not quite over it. It was stuck on top and something had to be done about it. The children went in different directions to find branches that might be useful in pulling the rope down to where they could reach it.  They tried using a large branch which proved to be too heavy, even with Lisa’s help. Others proved too short and too flimsy. Finally, after much effort and encouraging from all, the rope was pulled over the branch to where they could reach it. With some anchoring it to the small tree, the swing was ready and everyone agreed that Z would have the first turn.

They shared the swing for the rest of the morning as they came and went from other explorations.

E and J wanted to make a rope web with some of the other ropes but weren’t quite sure how to do it.  They approached Chelsa who agreed to help them tie the ropes where and how they wanted. E wrapped his rope around two trees and then J did the same.  N joined them and added yet another rope. Chelsa helped them tie them to the trees.

The long green rope proved to be tricky but, as they wove it around the trees, E followed Chelsa, keeping the rope from tangling and, before too long, the web was complete.  They hopped on but had different ideas about how they wanted to use it. E wanted to be animals in a cage while N wanted to bounce on the ropes. As their friends were welcomed to join in, the ropes became more of a bouncing climbing activity for all involved.

While P and E were working together to free a log from the snowy ground to add to a climbing piece they were making, part of the outside of the log broke off.  Upon inspection, E noticed that there was a small pill bug on it. A sign of spring! Exciting!

He asked what it was called and looked at it closely.  This got him curious about finding more bugs. He recruited Karen and, together, they went on a bug hunting excursion throughout the site and beyond in search of any kind of bugs they may find.  The cold weather, though, had all of the bugs in hiding, trying to stay warm. He remained hopeful, however, that his next hung may yield more and different bugs to observe and identify.

M got creative with a piece of a rotting log.  He noticed that as he moved it across the snow, it left behind tiny pieces of the orangey coloured wood, changing the colour of the snow.  He was excited to shared his discovery as he “coloured” the snow for all of his friends to see. E and M got creative in a different way closeby as they used sticks to write their names in the spring snow.

There was plenty of action and exploration to fill our morning and it was over before we knew it.  We wondered when spring would finally turn its head our way as we made our way back to the centre for dry clothes and a warm lunch.