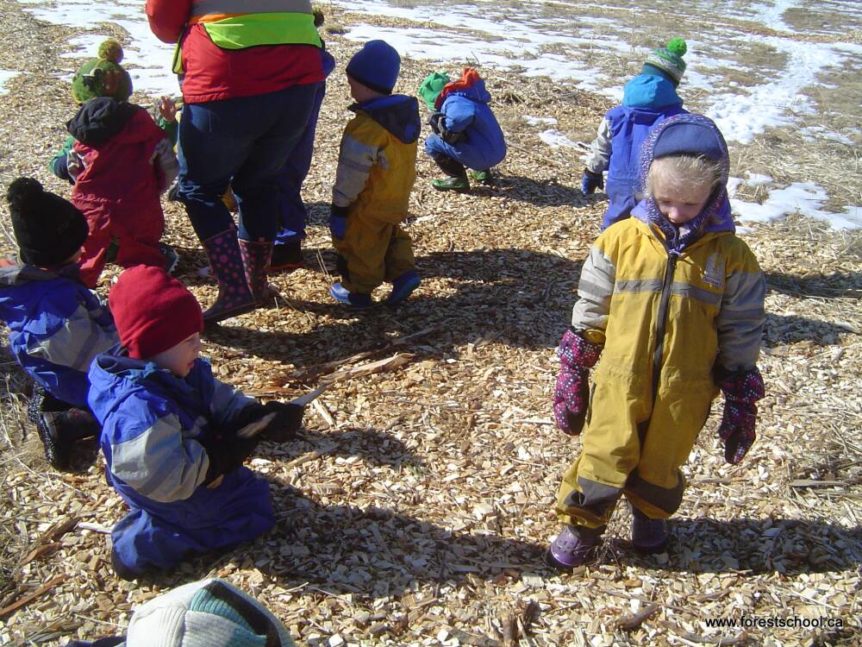 April Showers bring May flowers!  We were showered today with the rain that our flowers need to spring awake and grow!  The moment Discovery’s forest kindergartners stepped outside we could hear the non-stop song of a male cardinal.

Today’s Wild Wednesday session theme was ‘Creating Animal Stories from tracks and signs left behind’.  Friends met in the Discovery classroom to review some of our tracks to build our track stories and skills.  We played with animal track rubbing plates, puzzles and track moulds and crafted some take-home plaster tracks.  Forest kindergarteners were experts at piecing together three track story mysteries and delighted in sharing their recent discoveries of wild turkey, raccoon and coyote tracks!

Forest kindergartners also had a story to tell about finding ‘owl spit-up’ (earlier this year) also known as an owl pellet – right near their forest gathering area – what an exciting animal sign find!!!  We learned a bit about the saw-whet owl, Eastern-screech owl, long-eared owl and the great-horned owl; potential local owls that could have roosted and left that owl-spit up. Friends enthusiastically shared that they saw fur and small bones and skulls inside the spit up – one rodent skull was bigger than the other and students were curious to know if it might be a squirrel skull and some kind of mouse skull.  This is a good question to explore! Owls swallow smaller meals whole and 10 to 20 hours later spit up the owl pellets full of the indigestible parts like fur and bones. To celebrate the students incredible owl sign find, we decorated some owl masks to take home.

Outdoors we warmed up with a game of ‘Owl and Mouse’, where forest kindergartners popped in and out of mouse holes, a few potential mouse holes were also spotted along our walk.  One kindergartner wondered how mice keep their homes dry in the rain!

Friends noticed how a bald faced hornet Dolichovespula maculate nest was looking battered compared with how it looked last summer.  According to the Bug Lady ‘Birds peck apart old nests in winter, looking for frozen workers and leftover larvae and pupae, and for the spiders and other invertebrates that may shelter there.‘

Friends noticed a large dog track and counted its toes – noted its claws, big enough for a wolf, but decided it to be more likely a big dog – given our forest habitat and the frequent visits of dogs and owners walking about!

Teacher Chelsa spotted a pileated woodpecker ‘flapping, flapping, bobbing and gliding’ through the forest and most friends got a good look at it as it moved around a tree full of woodpecker cavities (also known as ‘woodpecker sign’).  We wondered if it will choose that site to nest this spring.

Like starlings, splashing in a puddle, forest kindergartners had a great time exploring in the mud and measuring the water depth to see if it was over their boots – heart-warming to witness!

Despite the rain, while walking to and from the forest we heard an eastern phoebe, a goldfinch, spotted robins, and a song sparrow sang to us while taking attendance before going in for lunch.  The squirrels were busy as per usual, the squirrel dreys are clearly visible-without the leaves on the trees-but not for long-as teacher Karen noticed that buds are starting to come out!