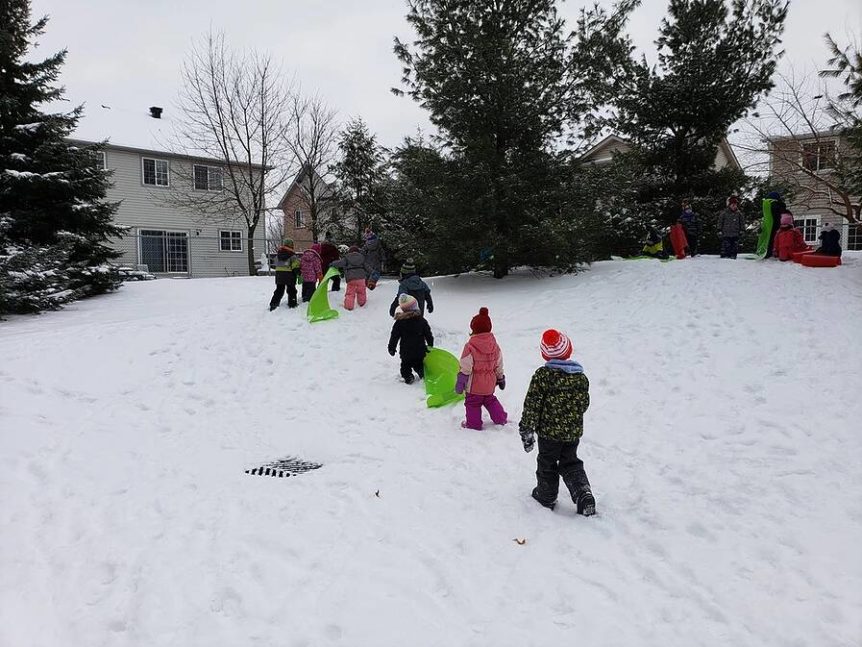 Birds and animals have had us captivated in the forest school program.  After making bird seed sandwiches for the birds, which they seem to love, we decided to make bird bread of our own using an easy bread recipe and adding bird seeds to the dough before baking it.

We had hung a “sandwich” outside our window to observe and were trying to keep a watchful eye on it.

Well guess what? At the very time we were mixing up our “bird bread” Lisa noticed that the bird seed sandwich outside the classroom window was missing!   We raced to the window to find that, just like the ones in the forest, it was on the ground. This time, however, we chanced to catch the culprit. Right then and right there, was a black squirrel chomping away on what seemed to be a very delicious wow butter and bird seed sandwich!

We decided that this was what was happening in the forest when we weren’t looking. We talked about how it’s ok that it’s not just the birds eating the seeds because all animals can use some help finding food in winter. Our bird bread turned out amazing and we now make a new sandwich each day to bring to the forest with us.

Actually, it seems like some of the neighbours are wanting to help feed our forest friends as well because, one morning upon entering the woods, we found that while our birdseed sandwich was gone, our feeder had been refilled with something else! What a curious surprise!

We have been noticing a LOT of tracks around the feeder each time we visit and this has gotten us very excited about who we are sharing our forest with!  We decided to follow some of the common tracks to see where they led and, as we followed them along the snowy forest floor, we found that some just disappeared!!!   “Where did they go?” Chelsa asked us and, all at once we looked…. UP! The tracks stopped at the base of a tree and we guessed that whoever had made them, must have gone up there!  We wondered if they were bunny tracks but then remembered that bunnies don’t climb trees and then we realized… “SQUIRRELS!!!!” all at once. While we didn’t see the squirrel up there at that time, we thought it was really cool to know that it had been there when we were away.  Back at the centre, we found lots of tracks in the School Age yard too. These ones were different in shape and size and we noticed something else with them… Poop! Most of us guessed that these tracks belonged to a bunny as we followed them all around the yard until they disappeared under the fence and into the field!  Did you know that rabbits like to dig and that they even live under the ground?!

On a walkabout through the woods, we found more signs of animals.  Nests! With the leaves now gone from the trees, we can see all kinds of nests of varying shapes and sizes and are filled with wonder as we try to guess who made them and who lives in them.  RM even spotted a very tiny nest in a small tree right next to the path. It was empty which got us thinking about “Why?”

After we returned to the centre, we decided to make bread for ourselves before exploring why the bird nest was empty.  The bird bread smelled so good while it was baking that we just had to make some for ourselves. Instead of seeds though, we added cinnamon and a few chocolate chips to ours. And for the record, it was delicious!

We sat down together to talk about why that little bird nest was empty which brought us to learning two three new words: Adaptation, Migration and Hibernation.  We learned that some birds and other animals are able to make changes in order to stay here through the cold, wintry months. Some find different food sources while others grow warmer fur. This, we learned means that they “adapt” to the change in the weather. We then recalled seeing the Canada Geese flying over head a few weeks back and remembered that they were flying to somewhere warm for the winter. Just as the monarchs had flow to Mexico.  They were “migrating”, we learned, to a place where they would be warm and where they would be able to find food and water more easily in the winter. Finally, we talked about how some animals eat and eat and eat in the fall and get really fat so they will have energy to last them all winter while they sleep. This is called hibernating. We started to talk about some birds that migrate and adapt and will be learning more about other animals in the weeks ahead.

Back at the centre, we noticed a strange animal track in the field.  It was quite a bit larger than the squirrel ones we were used to seeing. We put on our owl eyes and HG started to find more!

We got down low and circled them so we wouldn’t step on them. We followed them in one direction and then another as they moved along the snow over the garden, around the trees and behind the skating rink!

Further investigation told us that it had entered the yard near the gate and left under the back fence. What was it??? We could only make our best guesses about that but these included: a raccoon, a skunk or a porcupine.

In class, we decided to do some investigating as we brought out all kinds of animal print identification charts, moulds of tracks and even some stories about signs of animals.

We noticed that different animals have different shapes and sizes of feet. We also learned that one way to track an animal is by finding their poop!  The other word for poop is scat and, since we are absolutely crazy about the word poop, Karen got a really great new book to share for our next forest visit. It was called “Whose Poop is That?” and we loved learning about all of the different poop left behind by all the different animals. Did you know that you can tell where an animal poop came from by its shape, size and even what is IN the poop?! We thought this was so funny!

Back outside, we decided to make our own kind of marks in the snow as we wrote our names in the fresh white powder we found!

A few days later, we were back outside atop a fresh blanket of snow when IW excitedly announced a very cool discovery.  We all gathered together and we couldn’t believe what we saw. There were tracks all over the snow, tons of them and they all appeared to be from the same animal.  Each track had three “toes” and we knew right away that they belonged to a bird. Their large size helped us to conclude that they belonged to a turkey! We had seen turkeys near the centre in the past but we couldn’t believe that one had been in our Nature Classroom!

We followed the tracks as they went all over the place, in every direction.  Where was it going? Where did it come from? We wondered how it got into our yard in the first place and how it got out! Later, we learned that Chris had seen the turkey and he even took a video of it. We were overjoyed to be able to see the animal in action as it created the tracks we discovered!

Inside, we decided to see what other birth tracks looked like.  We got out all of our animal track replicas and sorted through them to find the different birds.  We found the talon of a bald eagle, a great horned owl, a crow, a blue jay and a coot. We noticed that they all had the same sort of shape with three toes but that some had an extra one and some were webbed.  We learned that the webbed feet belonged to birds that go in water and that this helps them to swim. We used the the replicas to make tracks in some clay, noticing the differences in the marks they left behind.  We also used some of the other animal feet replicas and tried to identify which animals they would come from.

Later, we tried this same process in playdough which really showed all of the details of the different paws and talons!

Later, we said good-bye to one another for the Christmas holiday, filled with excitement about our many plans with family and friends but we can’t wait to see see what the forest holds for us when we return for a brand new year and many wintry wonders.