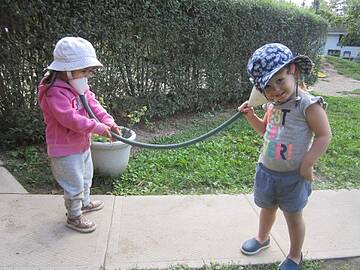 What an exciting start to autumn and goodbye to summer September was! Filled with musical sounds and tons of outdoor exploration, we got a wonderful transition into the next season.

Our stories follow, but first, check out the event we are hosting! On October 20th, we will host the Child & Family Collaborative’s “Joy of Childhood Conference 2018” at Discovery Child Care and you can purchase tickets for $60 here.

Enjoy the September highlights, we look forward to more this month!

Snails in the Nature Classroom!

The Preschoolers discovered a snail in the garden. J.C picked up the snail to show Chelsey. J.C was proud to tell Chelsey she found the snail and asked an interesting question, “Where is the snail going?” “I’m not sure, let’s put him down and see where he goes!” Chelsey said. J.C placed the sail down on the cement path and we watched as group, asking many questions. “Where is he going?”, “Is it a slug or a sail?”, “What do snails eat?”, “Look! He’s leaving a trail! How come?”

The Preschoolers were very curious about the trail the snail was leaving behind, so we talked about where the trail was coming from, along with why the snail has slime on his body. Some of the older Preschoolers remember our investigation about snails in the early months of Spring. “His shell is his home!” shouted G.C. “A slug doesn’t have a shell,” D.D said. “They eat leaves!”‘ M.F said.

We watched together as the snail traveled across the path, making small turns, and leaving small rocks in its slime. When we went inside, we moved the snail into a safe place in the garden. We discussed were would be the best place to put him, so he doesn’t get “sun kissed” (too hot, sunburnt) and where he will stay cool. But then, an even bigger question came about, “Is it a boy snail or a girl snail?” asks E.J. What a question!

We hope to carry this conversation inside the classroom and investigate the different types of snails we can find in Ontario. Where will this conversation lead us? To more questions about snails, or onto larger animals?

Toddlers paint in the Nature Classroom

To follow with our interest in exploring different textures from last week we set out painting on different textured paper such as bubble wrap, corrugated paper, cardboard, tree cookies and tissue paper, with different mediums such as pine leaves, sponges, sticks, and small paint brushes.

The toddlers had free range to explore with the surface they enjoyed and explore the different mediums. I noticed when the toddlers were using the sponges they were bouncing them on the paper up and down, when they used the pine needles some toddlers didn’t like to touch the prickles or they used them in a scraping motion across the paper.

The Toddlers that used the small paint brushes were using their fine motor skills and I noticed were painting with intention and precision on the different textured paper.

C.E has been showing an interest in humming familiar songs. He is very proud of his ability to hum Twinkle, Twinkle and ABC on his own throughout the day. What a feat!! I had a tape recorder at home and thought it would be an interesting way for the children to hear their own voices being played back to them. They loved it!

I also brought in some short pvc pipes for the children to explore. K.W and J.F picked them up and peeked into them, saying, “Hello!” C.Er brought a pipe up to his mouth and discovered that by humming into it, he could create interesting sounds. K.W dropped the pipe she was previously using and picked up one of two corner fitting pipes. Apparently, in plumbing terminology these are called 45 degree and a 90 degree angle pipes. Who knew!! She brought it to the woodchip bin and began scooping up the wood chips and inserting them into the corner pipe.

K.W appeared fascinated as she watched the wood chips slide right out of the opening on the end. A.C found it hilarious that she could yell into the pipe and make her classmates laugh along with her. T.R and C.D sat in the mud box and hummed a tune of their own. A.S joined in with her own rendition as she improvised humming into an empty bottle.

On Wednesday and Thursday, I brought out an assortment of musical instruments for the children to extend their interest in sounds a bit further. T.R enjoyed tapping on a cymbal, while C.K, L.B, C.El and W.S all banged on their drums. L.B and W.S switched back and forth using the cymbals and a tin can. N.E was very content joining her classmates and shaking a musical rattle. What a symphony!!

R.C. was excited to share something very special with all of her Kinder friends last week- two beautiful monarch butterflies!! They were given to them by a family member to raise and decided to share them with our class right before they hatched into beautiful orange butterflies. We moved them into our butterfly habitat and had R.C. show them to the class and explain what they were. She was so happy to show her friends. She explained that they were going to be butterflies.

We went off to our very first day of forest school, and when we returned, we noticed that one of the butterflies had hatched. The Kinders were very happy, especially R.C!! After lunch, we read “Butterflies” by Fran Howard”, and “Butterfly Life Cycle,” by Jeff Bauer and set out the life cycles basket with bugs, and insects, caterpillars, eggs, and butterflies.

The children created their own life cycles and referred to the books when needed. Some of the Kinders asked when we were going to let the butterfly go. We explained that the butterfly has to dry its wings before we can let him go. We decided we would wait until the other one hatched so they could fly away together. We went and got an orange from the kitchen and cut it in half and placed it into the habitat for food. We waited so patiently for the other butterfly to emerge. It finally happened the next day.

We observed them for a couple days and then released them on a beautiful sunny afternoon. Chelsa carefully opened the lid and one of the butterflies crawled onto her finger! The Kinders had a close up look at it before it finally flew away. “Have fun in Mexico,” we said as they flew away. Thank you to R.C. and family for sharing them with us.

This week the Toddlers got so excited at the sight of an interesting contraption. It was something I had seen while browsing in one of our toy catalogues recently. As I thought about it a bit, I was inspired and up to the challenge of trying to replicate one for the children.

It’s a funny looking thing, using a garden hose and attaching funnels on either ends. Pretty simple right? We didn’t know what to call this thing but after some discussion, we decided to call it a funnel phone. That description seemed quite fitting! Needless to say the children loved exploring and trying to figure out what it was and what to do with it.

C.K and L.B alternated talking and then listening to the sounds being created. C.E and L.B used it like a telephone saying, “H-e-l-l-o!” They also sang ABC, Itsy Bitsy Spider and giggled often. W.S and J.F were content just talking and shouting into the funnels. At one point L.B and C.E were faced with a challenge when the funnel on one end came off.

They both tried twisting and turning the funnel but it wouldn’t go back into the hose. They were pretty determined and gave it a good try but eventually, they did ask for help. I was glad to help them and off they went. T.R used it to demonstrate his knowledge of object permanence as he hid his car underneath the funnel and said, “Where car go?” He quickly lifted up the funnel end and said,’Ahh……there it is!” T.R and H.M exchanged a few interesting looks as T.R placed one end of the funnel on H.M ear.

It seems that they both found it quite humorous since they both sported huge grin!
If you’re looking to have your child or children join our Discovery Child Care family, contact us at 705-733-2052 to book a tour or just ask a question! If you’d like to keep up with us and the children, follow our Facebook page, Discovery Child Care.