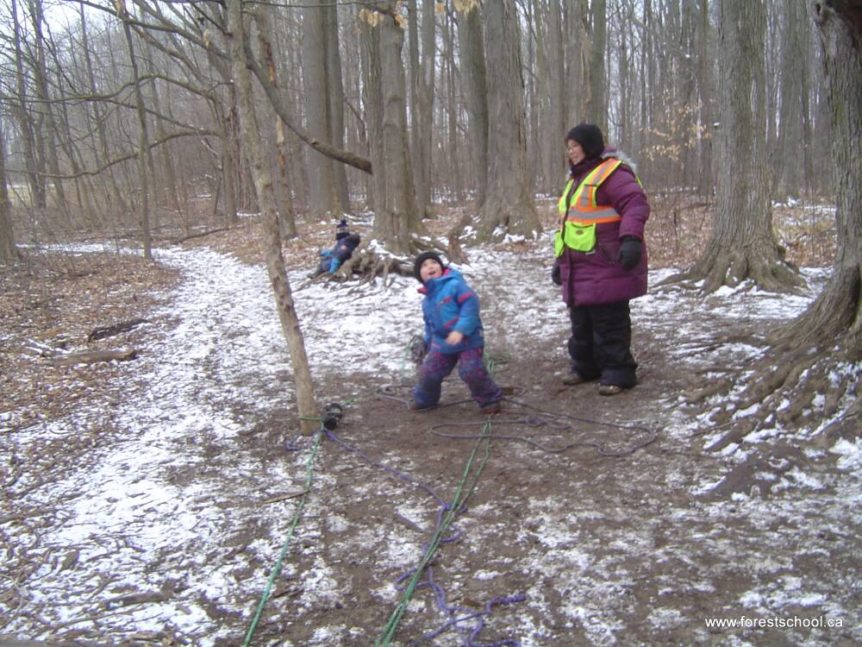 Monday morning was chilly but sunny with a little bit of a breeze.  We were bundled up and quickly became warm as we made our way to the forest.  It felt a little like spring to us and we were really happy with that. We noticed a lot of sounds up in the trees and we took some time at our circle time to listen closely.  We were very delighted to hear a variety of birds up above, some of which we could identify by sound. Each of us decided how we would like to spend our morning and then set off to accomplish our goals.  R decided right away to practise printing his name in the dirt with a stick. J joined him and they practised this for a little while before heading on to their next explorations. R and E used sticks to mark the dirt for other reasons.  They were making a map to use for sneaking “over to the monster” who was their friend, Z!

Many of our friends headed to our favourite fallen tree.  While the location was the same, the intentions for play and explorations varied. Way down at the far end of the tree, quite a few of us gathered where we spent much of the morning climbing on the roots that were our “boat” which later became a “motorcycle”.

R climbed the roots “like a monkey”  and just about everyone practised balancing of some variety on the large trunk!  Some of us pushed ourselves to our limits as we climbed a little higher than ever before and even jumped from higher heights, landing with a ‘thump’ on the still frozen ground, laughing as we did so.

M revisited the hollow tree where he had placed so many items many weeks ago.  He had a green rope along with him and was seeing how he could try to incorporate the rope into his previous work.  Using the end of the rope, he placed it into one of the tree’s openings. He tried to see if he could weave it around the the items inside the tree, eventually getting it to come back out through another opening but it kept getting stuck and caught up on the things inside the tree.  This task would need some further thought and would have to be retried another day.

Our morning was relaxed and we spent  plenty of time taking turns with the rope swing we had help to hang, peering through Karen’s binoculars and just enjoying our time together in the sun amongst the trees.

By the time wednesday rolled around, we were extra excited to head to the forest because he had a very light snowfall the night before and we wondered if it would show us any more evidence of animals by way of tracks.  As we made our way along the sidewalk, we were happy to notice all kinds of small animal tracks along the ground. C identified some of them as dog tracks, rabbit tracks and squirrel tracks but there was a very tiny set of tracks that she was curious about.  She wondered if they were made by a chipmunk. As we entered the forest, the fresh snow was littered with these very same tiny tracks which had us all wondering what had been roaming around the forest that morning.

As we greeted the forest with our morning song, Chelsa noticed something up in a tree.  Everyone stayed very quiet and, within a few minutes, we all saw it too. It was chipmunk! It was sitting in a cavity of a tree nearby, seemingly watching us. We discussed its presence and then decided that the mystery of the tiny tracks was solved.

As we went in different directions, another chipmunk popped out from beneath a tree where we had noticed holes before.  We tried to follow it, but it was very fast and probably a little startled by our presence and, before we knew it, it had disappeared into the woods. The first chipmunk, however, stuck around all morning long, apparently as interested in us as we were of it. We wondered if it had babies in that hole or if that was where it was hiding it’s snacks.  Z and C decided to try to track down the second chipmunk by following its tracks in the snow. They followed the tracks to the hole where it came from and found a lot of traffic there. Did it live in there? On they went, careful not to step on the tracks as they followed until they saw that the tracks went into another hole beneath another tree. They looked inside but didn’t see it. They continued on, down a path until the tracks left the path altogether. Here, they both looked up and, right there above them, was the second chipmunk hiding in a hole that had been made by a woodpecker.  They were so excited and so proud of their tracking skills that celebrated with huge smiles and a high five!

They watched if for a as it washed its face and looked back at them before they decided to leave to its business. They made their way to the tree that had been hit by lightning where M joined them. They took a close look at the tree, wondering about its possibility of an animal home and they noticed a lot of tiny holes. While they were too small to house a chipmunk, they were very sure that the tree was likely home to some ants or other bugs!

Back at our meeting area, a lot was happening.  O was practising his climbing and dismounting from the high part of the fallen tree, while R, E and E worked on their balancing.

The ropes had come out and some of us were interested in making a rope a swing. J and O each took their turn at trying to throw the rope over the branch to no avail.  It was just too difficult. Z decided to give it a try. He had a few close calls but was struggling to get the rope all the way over the branch. His friends and teachers gathered around to watch and to cheer him on. He persisted, laughing at his close calls and even doing a little dance here and there.  Once, it got caught on top of the branch but was brought back down to the ground. Another time, it was on the branch and just about over. He and some of his friends scoured the forest for sticks and branches. They were going to try to use these to pull the rope the rest of the way over the branch. With a few different ideas and attempts and a LOT of patience, he did it!  The rope dropped down low enough for him to pull it. He was really proud and his friends were just as happy for him. Karen helped to anchor the opposite end of the rope and the swing was ready! Z took his turn and then went off to another activity, allowing his friends to enjoy the swing as well.

We left the forest feeling accomplished as animal trackers, swing builders and brave climbers sharing our ideas of what may come our way when we return on Friday.

The weather was a little more wintery Friday morning with a light new layer of snow but out forest excitement flowed as we made our way along the sidewalk.  We couldn’t resist stopping for a while to roll and slide down the snowy slope by the field where we had ridden our sleds in the past. We rediscovered the sewer grate at the bottom and we gathered around it to shout into it to hear our voices.  This grate has become known as “the echo” due to the sounds we hear when we yell and laugh into it.

In the forest, we knew that the squirrels had been about as we saw and identified their tracks easily in the fresh snow before getting down to our other forest explorations for the morning.

The ropes came out.  D decided to use them for pulling.  He and M tied one end to a tree and pulled and pulled.  They wondered of their strength might even be enough to pull the tree down!

The tree never did fall but their confidence in their strength sure didn’t waver!

R, N and C decided to try to build a snowman.  Rolling the snowballs proved to be difficult as they weren’t staying stuck together too easily. They asked Chelsa to help and then off they went. It took a long time to find enough snow to make three snow balls and they weren’t very big but R decided it was enough to make a really great snowman.  C went off to try to make her snowman and she worked so hard. While carrying one of the balls, she dropped and it broke. Although she was a little disappointed, she smiled and then started over again!

With the help of a teacher to get the parts stacked, the snowman really came together!  Some more friends joined the project, helping to “stick” the parts together by adding snow between each of the balls and pressing it in place.  It was a little wobbly but it held together. Then the hunt was on for the parts required to make a face for the new snow friend. The children scattered in different directions, returning with whatever they could find that might bring their snowman to life.  In a short time, they had on the pieces they would use to give their new friend a mouth, a nose, eyes, arms and even eyebrows!

R decided that the snowperson they created needed a hat! Chelsa shared her pink toque and then it was complete!  R was so very proud of what he and his friends had created and they all loved that it was right there in the middle of our meeting area!