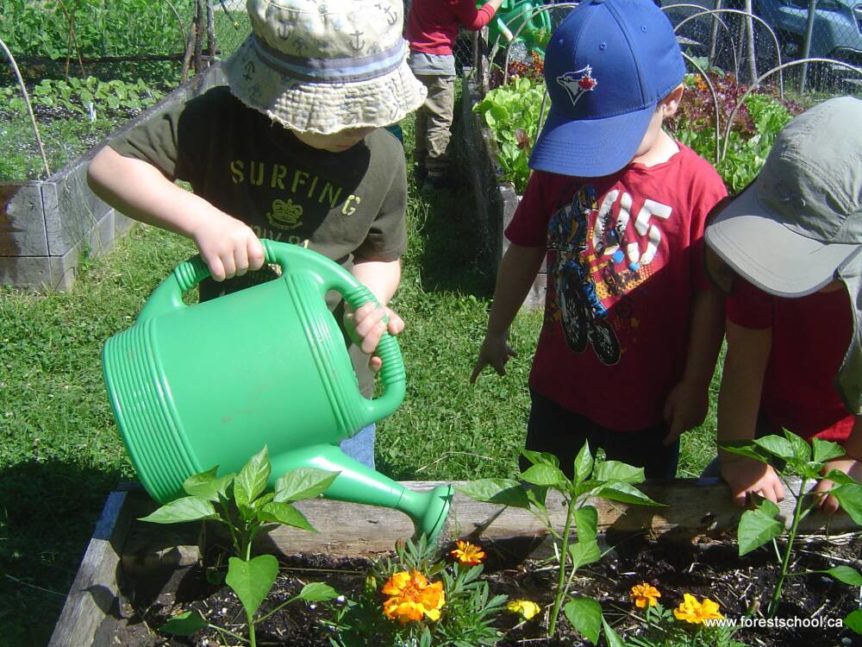 Monday morning we headed out to our garden with a very special plan in mind.  Our herbs and flowers have been growing like crazy with the sunshine we had been having lately and we thought we could use them for our special plan.  With the end of our Forest School Year quickly approaching, we had been planning a party to celebrate with our friends and families and we needed to make invitations. We needed the plants for this as we were using hap-a-zome, an art medium in which we hammer the colour out of different plants to create beautiful natural art work.  We found different kinds of herbs, which smelled delicious, and a few pansies in our garden beds before we searched around the Nature Classroom where we found buttercups, different leaves and even a few colourful flowers from our Peace Garden.

We brought our collection to the tennis court where Lisa & Chelsa showed us how to use the hammers to get the colour from the plants to the paper.  Some of us had used hammers before and ALL of us were excited to have a turn! We chose the flowers, leaves and herbs we wanted to try and hammered away, watching as the colour left the plants and seeped into our papers.

We couldn’t believe our eyes.  We also noticed that, as we hammered the lavender, basil, parsley and fennel, the smell of each drifted up into the air.  They smelled beautiful. some of us even had to give them a little taste. With a lot of hammering and patience, we each created a very beautifully unique invitation which we couldn’t wait to share with our families.

A chill had returned to the air by the time we returned to the woods on Wednesday.  With our jackets to protect us from the damp air and the swarms of mosquitoes, we huddled together to read a story about a monarch butterfly.  The story showed us all types of caterpillars and the butterflies they change into which was exciting because we had been waiting for our classroom caterpillars to change into butterflies.

E had found a black feather along the edge of the forest and happily shared it at circle time which made us wonder where it came from. Some of our friends made some guesses about who its owner may be which included: Owl, eagle, black bird, blue jay, chicken leg, penguin and hawk. We discussed where penguins live and were quickly able to rule that out as a possibility.  There were plenty of bird noises above us in the trees so Chelsa reminded us about looking and listening and that, if we did, we would surely find clues that would help to solve the mystery of the black feather.

The fallen log at our eastern boundaries offered something new for us to see, Wednesday morning but we had to look closely to notice it at first. While looking for bugs, P and P noticed tiny white things on the old log.  So tiny, they could barely see them. They noticed they were soft and, with the help of the teachers, realized that they were the very beginnings of mushrooms growing. “Baby mushrooms”!

We were gentle with them and then we turned our attention to the logs nearby. Here, we noticed even more mushrooms! These ones had stripes and were sort of flat and they looked a little like sea shells.

R and J came to see the the new found fungus and decided to go searching for any more that may have appeared in the area.  They made their way along the fallen log but they found something else that sidetracked their interest. There in the hole on the log was water… and then more water in the hole at the bottom of a nearby tree.

They dipped some found sticks into the water and then tested them on the log to see what kinds of marks they left behind.  This focused their attention this new activity. They made marks with the wet sticks before, eventually, writing their names on the log with the water.

N discovered a long ago discarded piece of rope in the forest that morning.  He picked it up and brought it to one of the jumping boulders where he placed it into the shape of a circle. He then began collecting items from around the forest and placing them inside the circle. When he had finished, he was sure to show everyone his work of “art”. It was very beautiful and we all agreed that it should be left behind for the animals and trees to enjoy.

Our hammocks became “cocoons, we baked pies in our mud kitchen and some of our friends took time to share the bird Identification books with one another at our meeting area. Another fine forest school morning flew by all too soon!

Friday morning we decided to explore the trails of the forest together to see what Mother Nature has been up to in other areas of the woods over the past couple of weeks.  We walked together, listening for signs of forest life and were rewarded with the sounds of many different kinds of birds. We managed to catch a glimpse of a couple couple of curious squirrels as we embarked on our walk but not a lot else came out to see us aside from the mosquitoes!

We were surprised to find that the water in the river wasn’t very deep and a few of thought it might be ok to step on the leaves and mud that were there in its place.  We learned quickly, however, that the water and mud was a little deeper than we had guessed. A few shoes were wet, muddy or stuck in the muck altogether but we weren’t deterred in the slightest.  Even the stinky smell of the mud didn’t send us in another direction. There’s just something magnetic about mud!

Those of us who preferred to keep our feet dry and clean made a game of scooting across the river on a log.  We were like a line of ants as we moved ever so slowly along the log, hopping off once we crossed the mucky water.

We made our way along the trail, noticing different types of pink and white flowers all around us as well as another jack in the pulpit.  We were really excited to, once again, discover mushrooms! These ones were different than the others we had seen which meant we all had to get a very close look at them!

At the hollow log, some of us braved crawling inside while others opted to climb over it at  the other end. We were a little hesitant to go all the way through at first but, once it was checked for bugs by our friends and the all clear was given, in we went!

We made our way across the field and, as we headed back to the centre to tend to our garden, some of our friends discovered a squashed caterpillar on the sidewalk.  We wondered if someone had stepped on it. Then, we found another one but this one wasn’t squashed! We placed it on a piece of bark that we had collected in the woods to bring back to the centre with us.  Our classroom caterpillars were all in their cocoons so we thought it might be fun to raise this one and see what it turns into.

We spent some time in the garden, watering and tasting as much as we could.  The lettuce, herbs, spinach and kale were so delicious. We even tested a couple of the edible flowers and decided that they were pretty good too!

P helped Chelsa to fix the lid of a broken bug collecting container and we worked together to collect some leaves and sticks to put inside. We found out that the rather large caterpillar we had found was a tent caterpillar and that it might like to eat some of the leaves that grow in our Nature Classroom so we put a few of those in as well.  Then we added the caterpillar to its new temporary habitat. We wonder what it will become!