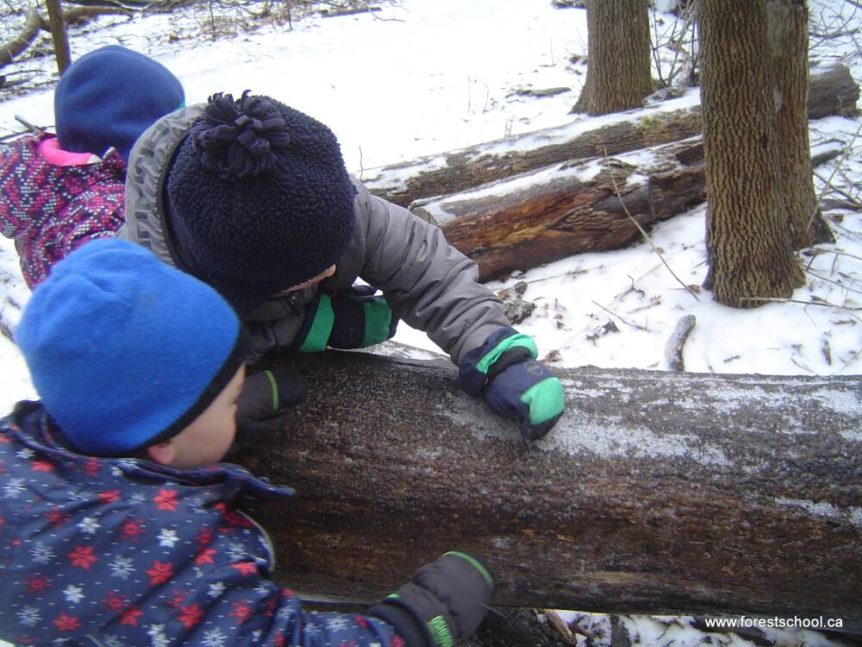 We returned to the forest after a couple weeks away (due forestry work being done in the forest) to discover some unusual changes. Some changes were weather related while others were directly related to the reason for time away from the woods. Our Wednesday began in a not so spring-like fashion with the beginning of a winter storm upon us. The trees were coated in a thin layer of ice and the ground had a fresh layer of slushy, sloppy snow on it.  We were so excited to get back to the forest that we barely noticed the fact that spring decided not to join us. We sang our morning song as we peered up into the icy maples, watching as small bits of ice fell from them as the branches swayed in the wind.

The children made the decision to go for a walkabout and we hit the trails. We could hear the slight tap of tiny pieces of ice as they melted from the branches and made their way down, tickling the tops of our hoods and hats as we walked. We stopped to examine some of these pieces and we noticed that they were shaped like the branches they had fallen from. We wrapped them on our fingers and on nearby twigs to see how they may have looked up in the trees and we discovered some animal tracks as well. A few question were raised about what had made them.

Some of our friends thought a dog while others imagined that maybe a fox had left them. Moving along the path a little farther, we noticed that no animals were out and about which made us think about where they might be.  Realizing that we would prefer to be warm and cozy on a stormy day, we decided that the animals were doing just that… staying warm and cozy in their homes.

Farther along, we noticed something different about the ground we were walking on. It wasn’t just the snow that we felt beneath our feet but something very new. R recognized it right away as “The trees”. He was right.The path had a fresh layer of shredded tree trunks and bark and we talked about where they came from. It was only a moment before many of our friends realized which trees the mulch belonged to.  We had been kept away from the forest because the city had been removing some trees to widen the nearby street. We had been watching this from our classroom windows and from our car windows on our way to Discovery as the street became more and more bare. We walked out to the edge of the forest to get a closer look at all of the work that had been going on and were surprised and sad to see how many of our trees had been cut down. We looked at how much space there was between our forest and the street and saw all of the stumps of the trees that used to occupy that space.

We chatted a little bit about this change but the winds began to pick up a little so we decided to keep moving. We crossed our river as we made our way out of the trees and through the field. We decided to go for a walk through the neighbourhood where we wouldn’t have to worry about the trees over head. As we walked, we were surprised to see just how much tree damage was done by the ice and wind around us with tree branches shattered on the ground in places. As we returned to the centre, the sun came out a couple of times to show us the beauty of trees that remained encased in ice as it lit them up all around us.