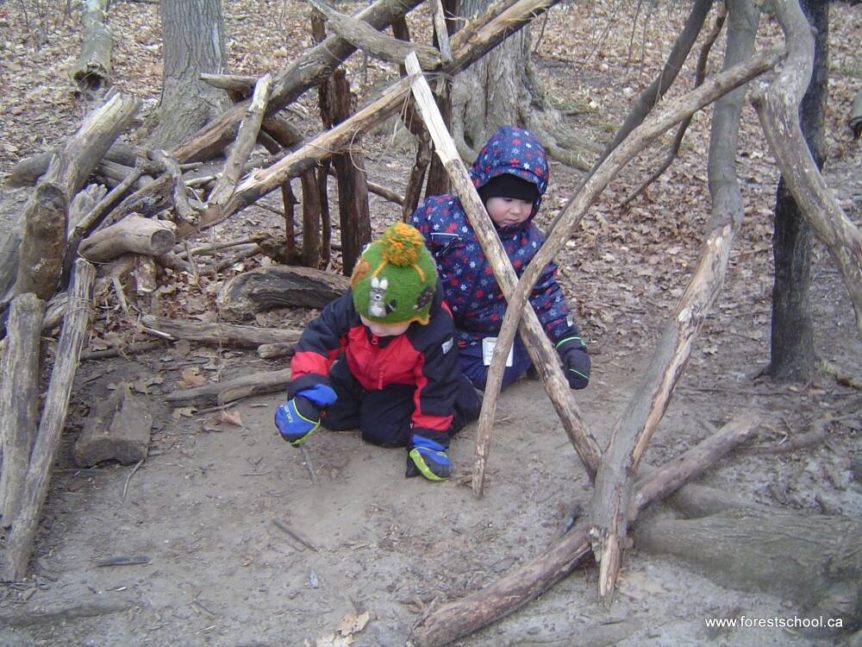 With a new year came some new friends to our Forest School program and we were so excited to introduce them to the forest and all of the things there that we like to explore.  More exciting was the squirrel who made his way down a tree to greet us as we entered our meeting area. We began the morning by sharing safety rules and boundaries with our new friends to make sure they could learn safely in the forest too. With our morning song sung, we let our curiosities direct our next moves.

Many of us went  to inspect the hole that acts as part of our boundaries.  We noticed that, since there wasn’t any snow on the ground, there were a lot of loose sticks and branches available and we almost immediately,  began working together to make a nest!

We each collected different sized sticks and branches and placed them into the hole. Slowly we worked our way farther away from the hole, finding just the right materials for the job. G gathered a bunch of found fallen leaves to add to the nest to make it softer and, before long, E was a bird, chirping away in her nest.

While there was no snow in the woods Monday morning, the ground was frozen and so, we learned a few other things. J discovered that the hole in the tree where he found water before, now contained ice!   He chipped away at it with a stick a little while but found that it was very solid and not willing to budge!

He decided to go and see what was happening at a nearby tree where C and M appeared to be digging at the ground with sticks.  He found that they were, in fact, trying to release a rock that was, somehow, stuck to the ground. M had tried to pull it up with his hands and then C suggested using a stick to dig it out.  They both worked away at this for a quite a while. C mentioned “We could try using our boots” but then decided to try using her long stick as a lever, pushing one end under the rock and using her strength to push the other end down.  I guess she was a little stronger than she thought because, after a while, her stick broke! We all looked at each other with a surprised look as she said “I need a stronger stick”. She searched for another stick while J decided to try helping to dig the rock out.  When I asked “Why is it stuck?” M answered “I don’t know” and J said “Its frozen there!”. With a little more work, and C’s idea of using their boots to kick at the rock, it came free! Upon turning it over, they discovered that there was ice on the bottom of it. It WAS frozen to the ground after all!

Over by our shelter, some of our friends decided to add more branches to the existing structure.  They went inside and checked out what it was like before looking for suitable branches to add to the walls.  They ran into a similar dilemma to that of the “stuck” rock quite a few times. As they went to pick up some of the sticks and branches, they found that they were stuck to the ground.  Z said right away that they were frozen. Many of these released from the ground with a few little kicks of the boot but some had to be left behind for another time.

There were a lot of things to notice and explore in the forest.  We surprised at how many holes of all kinds we came across. Mostly, holes in trees but C found a small hole that seemed to go nowhere and wondered how it got there.  Her guess was that it was an ant hole. We will have to explore this one a little further I think!

With all kinds of dramatic play experiences with our friends from riding on “snowmobiles” looking for treasure and being pet dogs, it was magical to see the imaginations of the children run wild using only what Mother Nature had on offer that morning.  We look forward to seeing what our future forest visits will bring our way.

Wednesday morning we were so excited to get back to the forest.  Mother Nature sent a blustery, snowy and cold situation our way but we decided to bundle up and brave the weather for the chance to see our forest one again. While we walked, Karen and P discussed what we may see, hear and even smell while we were in the woods.  P thought maybe we would smell a skunk. This prompted a conversation in which Karen explained that we may not see a skunk because “they are nocturnal. They sleep in the day and are awake at night.” P wondered how they could see at night and guessed that “maybe they use echolocation…like bats”.  Karen wondered “I don’t know. Maybe” to which P replied “Did you know that bats can camouflage? They’re black”. This left us all a little more intrigued about skunks, bats and the animals in our forest in general.

It was a slow and steady pace that got us to the woods where we greeted the trees with our morning song before entering the trail that would take us on a walkabout.

Right away, we noticed that there were no animals or even animal tracks in sight. We attributed this to the weather as the falling and blowing snow would surely cover any animal tracks that had recently been left behind.  We talked a little about where the animals might be and we came up with some pretty sensible ideas. R thought that that they would be in caves, staying out of the weather while C guessed that they might be cuddling in their nests.  As we talked, we all agreed that home and cozy is where we like to be when it is cold and stormy outside.

As we walked along, we stopped to sweep away snow, uncovering the ice beneath it before warning our friends behind to mind their steps on these slippery spots.   While there wasn’t much action to be seen, there was certainly plenty to be heard as we stopped to listen, noticing the sound of the wind through the branches, the blowing snow as it rustled some leaves that remain on the trees and, at one point, a crackling, creaking sound that we realized was coming from a particular tree as it moved in the wind. We did take time to unbury our faces and count seven squirrel nests high up in the trees and one, we guessed, chickadee nest.

The wind seemed to come from every direction and we turned our backs against it as we made our way across the field.  Here we stopped to talk while waited for the rest of our friends to catch up and gather together before pushing our way through the blustery day back to the centre to some cozy warmth of our own.