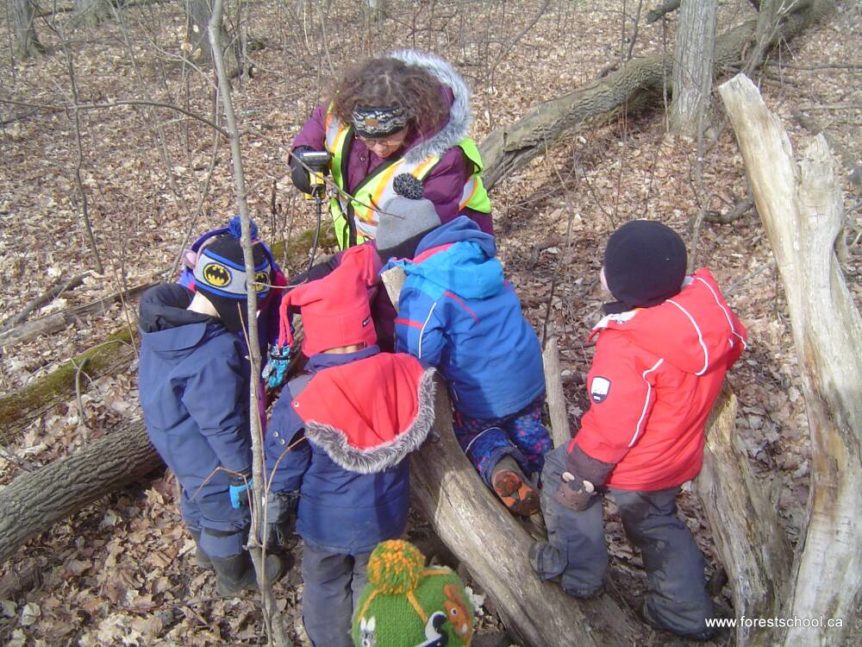 We started our week with lots of sunshine and a brisk north wind but we had a special trip to make before we went.  We decided to deliver Valentines from our Valentine’s Day celebration to our good friend who has been away for a while.  This took us on a little walk through our neighbourhood which built up the excitement about surprising our friend at home as well as gave us the opportunity to check out the neighbourhood together.  The highlight of our walk was when M noticed an extremely flat tire on a vehicle in one of the driveways we passed. We all stopped to get a good look at that!

We were happy to see our friend and to be able to brighten her day.  After we said goodbye, we were off to the forest.

The first thing we noticed in the forest was all the mud!  Everywhere we went, the ground was slippery and messy and mucky which also meant it was a lot of fun!  J and C used sticks to pick up mud and write on one of the boulders before using the sticks to scratch pictures in the mud.

Not far off, M was using the same mud to “paint the batmobile” as he used his gloved hand to pick up mud and rub it all over the branches that made up the structure. It wasn’t long before his friends joined in to help.  They moved on to another extra muddy area where they used to mud to paint everything around them, then themselves and then each other! There were a LOT of muddy but happy faces running around the forest before too long… self identifying as “mud monsters”!

E and J went right to work in our meeting area creating a fire pit.  They began by laying the sticks in the shape of a square in the centre of our sitting area before collecting more to add to the “fire”.

Soon, they had the help of a few more friends who agreed that it would be ok to use branches and sticks from the structure to add to their big fire!  They worked together dismantling parts of the structure and helping one another to collect other branches and sticks before bringing them together and adding them to their bonfire.  Everyone was welcome to join in this activity and many of the children came and went from it throughout the morning, helping to make the fire bigger and better or just to sit and enjoy it imagined glow.

C and J came across a hole in a tree that had some ice and water inside.  They noticed thatt the ice was broken in the shape of a triangle and had to show all of their friends their unusual discovery before dipping sticks into the water to use it as a drawing and writing medium. They practised writing their names on the nearby log with help of a teacher and smiled as they watched their names appear and then slowly fade as the watery words dried from the sun.

The trees in the forest sheltered us from the cold wind which made our morning sunny and comfortable.  The time flew by and soon it was time to for a soggy, mud covered walk back to the centre for lunch .

We were excited to return to the forest Wednesday as we had high hopes of finding more mud to explore.  We were not disappointed. Upon approaching the forest, we could see that the path into the woods was very muddy which offered us something really exciting to see.   There were a variety of tracks in the mud so we stopped to investigate, getting down low for a closer look. Our guesses about some tracks were that they belonged to a raccoon.  They were medium sized and they followed along the path. The children thought it was neat that animals walked the same paths as they do when they are in the forest!

We kept our eyes peeled as we walked and G noticed some very tiny tracks!  “Look!” He said. “These ones are really tiny!” A few of his friends gathered around and tried to guess what made them.  He put his hand beside them and saw how small the little feet of the animal must have been and we wondered if it was a mouse or a chipmunk. This really got us curios about what had been afoot in our forest!

As we sat down at our meeting area, Michelle noticed something right by our rope swing tree.  It was kind of like a hairball but it was also sort of large. After our morning song and discussion, we decided investigate this a little further.  What was it?!

We were worried that it was poo but, when Chelsa poked it with a stick, there was no poop in it… just fur!  Well, that’s what we thought at first. As she poked around, we looked closer and closer, trying to decide what it was we saw.  “I think I see seeds” said one friend. “Are those feathers?” asked another. Suddenly, Chelsa said “I feel something hard.” She used the stick to pull the fur away and then someone said “It looks like teeth!” The hard object appeared to be a tiny skull.

Further investigation revealed other teeny tiny bones as well.   We talked about what kind of animals might be that small and some of the children thought a mouse would be.  We then talked about what kinds of animals might eat mice. Someone came up with “An owl” as one of their guesses.  Through observations and lots of conversation we learned about how owls eat mice and other tiny animals but their body doesn’t like or need the fur or the bones so they “spit up” those parts later… thus leaving behind and “owl pellet”.  How exciting to find this in our forest!! We looked up to see if we could see any owls but weren’t lucky enough to see one that day!

Later, P approached Chelsa and asked about something else he had found.  He wondered if it was an “owl throw up” too. They looked at it together and noticed there was no fur and they talked about where it came from.  As they broke it up, he noticed that it was pieces of rotting wood from a log nearby.

With all of the snow and ice gone from the forest, the coast was clear for climbing.  We had been cautious in previous visits about climbing and balancing as the surfaces of the boulders and the logs were very slippery.  Wednesday, however, we were back at it! We climbed, crawled and slid along our favourite fallen tree together and took turns leaping as far as we could from one of the boulders.

C and Z even tied a rope into a tree and tried to use that as aid for climbing the tree!  The idea was wonderful but the execution needed a little more work.

The lack of snow uncovered some small wonders on the ground as well.  Z, R and J discovered a small hole in the ground and they wondered how it got there.  They made some guesses about it… wondering if it was the home of a chipmunk or a mouse.  Then they wondered if it was the home of the mouse that the owl had eaten. We tried to look down inside but it was too dark to see.  They agreed that it should be left alone incase something did, in fact call that little place home.

M spent quite a bit of time investigating the tree where he had placed so many sticks and rocks inside a hollow tree a few months back. He decided to take on the  mission of trying to remove one of the rocks. He used his hands, he tried using sticks and he even had some friends come and give it a try.

Despite their efforts, the rock remained wedged in place and, with our morning in the forest coming to a close, they would have to come up with some new strategies to try out another day.

We couldn’t wait to see what else our forest had in store for us when we arrived Friday morning as we made our way to sitting area.  The muddy trail didn’t offer much new in the way of animal tracks as we entered but Karen had brought along some new things for us to use to help solve of of the mysteries and unanswered questions we had from our observations on Wednesday. Out of her backpack she pulled two pairs of binoculars and some really strange tool that we had never seen before.  She explained how the binoculars could help us see far distances which we thought would be good for looking for that owl that left the pellet. We also wondered if we would be able to see inside some of the nests that sat high above us in the trees. The other tool was called an inspection camera. We learned that it had a light and a camera on the end of it which would allow us to check out things we had trouble seeing into before.  Our excitement was through the roof. We hadn’t really considered being able to see our forest world from these new perspectives!

Some of us gathered near our meeting area, eagerly awaiting our turn with the binoculars.  Each of us very patient and, when we finally had our turn, were surprised at what we saw through the lenses.  “I can see those holes in the trees” said R, as he focussed the binoculars on holes he had previously identified as woodpecker holes.  He couldn’t see if anything was living in them though. P was “looking for animals”, M enjoyed moving around looking at all of the trees and C was intently “looking for owls”.

While we didn’t chance to spot any animals, we did have a few laughs as we zoomed in on our friends and teachers nearby.

The inspection camera made its way, first, to the hollow tree where some of our friends had been doing so much work filling and emptying it using rocks and sticks. While it didn’t reveal anything incredibly unusual, it was really neat to see the pictures it sent back to the screen on the end we held.  We enjoyed taking turns looking to see what was inside.

We decided to take it over to the hole in the ground where we thought a chipmunk may live to see of we could confirm anything.  As we placed the camera end into the hole, we wondered what we would see… but we were a little disappointed to find that hole didn’t contain anything and it, in fact, just abruptly ended.

J remained very interested in the owl pellet which remained where we had found it on Wednesday.  Using a stick, he prodded at it, revealing more tiny bones. He talked about each bone he found and then was surprised to reveal a second small skull.  With the help of a teacher and some friends, two sets of other bones were revealed as well. Did this owl eat two animals? J had a lot of questions and ideas about the “owl spit up” and even made up a story of his own which involved a unicorn eating an owl and the throwing it up.

Outside of our specific explorations, our forest friends continued with their amazingly imaginitive dramatic play experiences.  We were superheroes, we created “boobie traps” with ropes and became family of birds in the nest we made together all before it was time for lunch!  What a fantastic week together in the forest. We left filled with excitement for our Monday return!