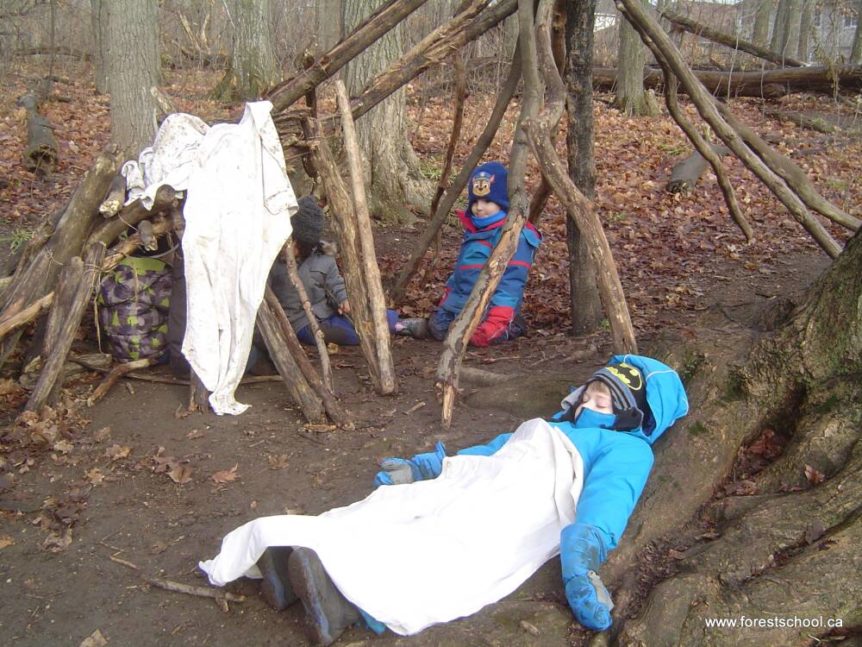 Monday morning the air was brisk!  We bundled up and made our way to the forest where we were surprised and delighted to see everything was just as we had left it.  Sometimes we have some fixing up to do after the weekend, but not this time! This meant that we could pick up where we left off and, for our forest school friends, this meant getting back to our “batmobile”.  With the addition of blankets and a few sticks and branches for walls, it started to become more of a shelter. C noticed that it was warmer inside than it was outside and her, N and R spent a little time inside, giggling, telling stories and making up names for their new shelter.  A silly name they came up with was “Banana Tootie Fish” but, later, they decided it was a Pirate Cave. Their friends came and went and they were happy to squish inside together to stay warm and to share some laughs..

Outside of the shelter, there was a lot going on as well. At the far end of our site, M noticed the tree with the big hole in it.  He recalled working with J a few months back to remove a brick from the same spot. When Karen asked him if there was anything else inside, he peered inside and found only some leaves.  He decided he would start to fill the tree back up!

R, J and D were curious about this and decided to join him in in his search for things that could put inside the hollow tree.  They began with different sticks before they decided to search for rocks. With a little bit of thinking, they knew just where to find some.  They remembered making the “fire pit” last week and placing rocks around it and decided that this is where they could get the rocks they needed for the tree.

They took turns placing the rocks into the tree, turning and twisting each one to make it fit.  They had one object in particular that just would not fit and, over the course of the morning, they revisited ways to get it into the tree.  Alas, despite their persistence and different attempts, it just would not fit. Many of the children came and went from this project throughout the morning, exchanging ideas and working together to collect items for the cause.

R expressed interest in having a rope swing Monday morning and, right away, he had many friends willing to help.  Throwing the rope over the branch has become a challenge that many of the children are interested in despite the fact that few have succeeded in getting it over the branch thus far.  They enjoy the support they get from their friends with each attempt and share in the excitement of close calls. While many of the children took turns trying to hang the rope, they just couldn’t do it that morning.  They took turns gathering, winding up and throwing the rope, but the high enough, hard enough, perfect throw eluded them.

After much persistence, Michelle gave them a hand and helped them get the rope swing up and working.  The children were grateful and took turns showing off their swinging moves.

While everyone waited patiently for their turn on the swing, Michelle helped to also make a rope web for them.  They watched in excitement as she wove it through and around the trees, making sure it was safe for climbing and bouncing.  The second it was secure, it was filled with climbing children. C immediately made her way quickly and confidently to the very top sayin  “Look at me!” once she got there.

They bounced and wiggled as they held on to the rope with all of their strength, careful not to squish one another.  J made his way up to the top as well, careful not to step on his friends fingers.

With so much happening, the morning whizzed by.  We were surprised to hear the sound of our bell, calling us to the meeting area.  We had a lot happening and therefore a lot of cleanup to do but we worked together and had our site cleaned up in no time, ready to head off for a nice hot lunch back at the centre.

Wednesday morning greeted us with 42km per hour winds which , sadly, meant the forest wasn’t a safe place to learn that day so we spent the morning exploring in our Nature Classroom at the centre instead.

When Friday came, we couldn’t believe that it marked the the beginning of December as the weather was fairly warm and there wasn’t a single snowflake in sight. Along the way, some of us expressed an interest in rolling down the toboggan hill and thought we could make some time before lunch to do that.   In the forest, we enjoyed the story “I Am Peace: A Book of Mindfulness” by Peter H. Reynolds before making decisions about how we were going to spend the morning.

Ropes immediately became the interest of the morning as the children brought out each one and found various creative uses for them. R and P used the longest rope to wrap around some tree, creating a “boobie trap”.  They worked together to unravel it and to untangle it whenever it got on roots or tree bark, asking one another to assist and then giving the “ok, now try” when they solved these little dilemmas. Their teamwork was really quite incredible.

D and H also made a boobie trap of their own.  Theirs, however, consisted of only one tree and they, themselves, were the ones trapped inside.  They each snuggled into the tree roots and chatted about their weekend ahead and the things they thought they may do.

A’s rope, she said, was a snake and she took her snake all along the forest floor, weaving it through and between  her friends as they played and through the trees all around her.

Back at R and P’s larger boobie trap, J, Z and G had joined the play, entering the boobie trap and tugging on the rope.  They started to try to climb up on the ropes when Karen reminded them that this rope wasn’t secure enough for climbing. This is when they decided that a rope web would be a great idea.  In order to have this, though, they had some work to do. Chelsa helped them to weave a red rope and a blue rope between two trees. J and Z took turns helping to get the rope in the right position and, soon, they had a rope web secure enough for climbing!  They hopped on fast and fearless, leaning waaaaaaay back as they held the top rope while standing on the bottom rope as it swayed beneath their feet.

Soon, they were joined by more of their friends and the bouncing began.  Their laughs could be heard throughout the forest school site as they struggled to hold on and stay on the web.

In the “batmobile” J, G, O and E were engaged in dramatic play for quite some time time.  They were a family with each of them having their own role as members within the family. They had blankets for beds and and all sorts of conversations between “child” and “mommy”.

M recalled his tree explorations from Monday and decided to see if anything had changed there.  He looked inside the hollow tree to find that all of the items they had placed inside on Monday still remained.  “I need to get more stuff” he said as he went off to collect more sticks and rocks. D said “I can find more items” and went off to help.  They both returned with sticks of different sizes and worked to fit them into the hole in the side of the tree. As D placed a stick with little branches attached inside, he noticed that the branches stuck out and said “I’m making Christmas”  M liked this idea and pointed it out to Karen when she came to see their work. They made a new discovery about their hollow tree at around this time as well. While putting the sticks in, they noticed that they couldn’t put them up into the tree.  The part above the hole wasn’t hollow! They wondered why it was solid there but hollow the rest of the way down. On the other side of the tree, C took a close look at the bark finding a hole in a hidden spot. She wondered if it was made by a woodpecker and showed her discovery to Lisa.

At about this time, our lust for rolling down the hill returned and, those of us who really wanted to go decided to clean up our site and make our way over to the hill.  Some of us spent our time rolling as fast as we could down through the damp grass while others made their way through the thick pine branches in a hiding game that we created.  Mostly, we spent as much energy as we could, runing, rolling and tumbling together.

A few of us stopped to check on the “echo place” as we stuck our faces down low to the drainage grate and made sounds with our voices or found pebbles and rocks to drop down into the water that was at the bottom.  This is how our December at Forest School began and how our week of evolving projects in the forest came to an end.