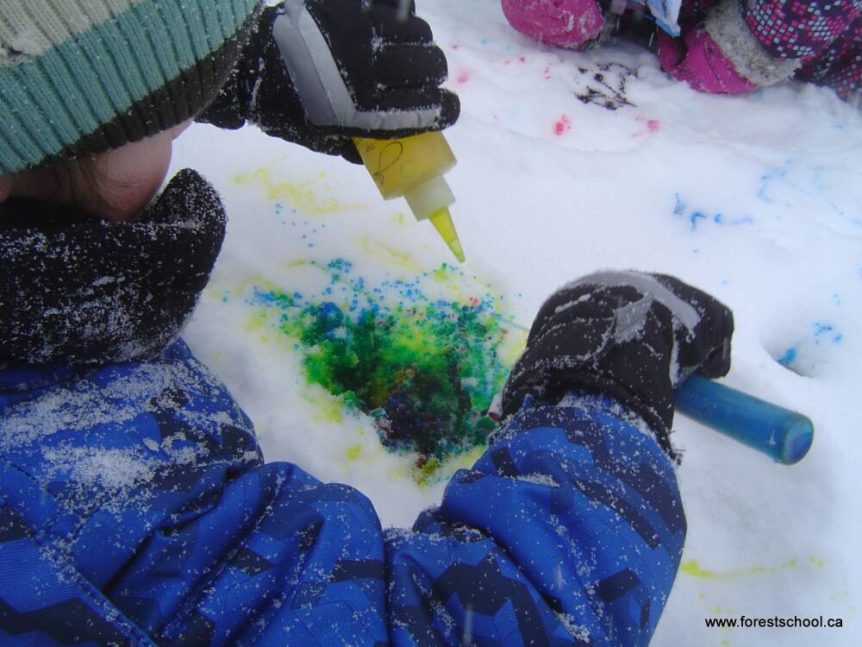 We woke to fresh snow and a rather chilly start Monday morning but we were determined to get out and enjoy the wintery weather, if only for a while.  The snow made for slow moving along our walk but we had sleds and crazy carpets in tow and that was all the motivation we needed to keep pushing forward.  We stopped in the field and wished our forest good morning. With that, we were on our way up the hill with our sleds!

Jumping on and and pushing off, we were a little disappointed at first.  The fresh snow slowed us to an abrupt stop only part way down the hill. It would take more than this to do deter us, however, as we were so eager to speed down that hill.  Back up we went, taking turns until the snow finally started to pack down and each slide down became faster and faster!

Chelsa had found some tracks in the snow earlier that morning and, since P had shown interest in animal tracks in the Nature Classroom, she asked if he might like to see them.  They walked to a tree in the middle of the field and noticed that there were several sets of tracks, seemingly made by the same animal. Following the tracks, P noticed that they went from under the tree towards the forest and under a pile of brush.  Upon closer inspection, he noticed that they went in many different directions from that pile of brush.

Chelsa asked him what he thought of that and he wondered if whatever had made the tracks might live under the pile.  He then wondered what it might be. “A squirrel, a raccoon, a one footed small monster” were some of his guesses as he mentioned “it looks like it has one foot and is hopping.”  He reported back to Karen with what he had discovered, adding it could have been a “small one footed dinosaur”.

On the hill, the sleds were picking up speed.  We really have begun sharing sleds with our friends, piling onto the sleds two and three at a time before sailing down the hill.  We had a few wipeouts and near misses but those added to the fun and taught us what not to do next time. We took turns pulling the sleds back up the hill and finding different ways of going down again.

Some of us decided to take shelter under some of the white pines nearby.  We crawled in beneath the branches and cozied up in our “home” with our dogs and families.  Different trees were the homes of different families and each was a great little hiding place.

With red cheeks and a few final rides down the hill, it was time to head back to the centre.  The cold was nipping at our fingers and toes but our shortened was still very sweet, especially when we got back to the centre and warmed up with hot chocolate together!

Wednesday morning we were beyond excited because it was finally time to get our skates on and test out our skills on our ice rink at the centre!  We had been waiting all winter for this but have been given some bad luck with the weather being too warm, melting the ice or too cold for us to be outside for any length of time.   We bundled up and made our way outside with our skates and helmets in tow. We were excited but still patient as we waited for the teachers to help us tie up our skates and do up our helmets and then we were off! Some of us had skated many times before while others were just starting out but we were all so happy to be on the ice, with the snow falling over us.  In fact, it fell so much and so fast that Chris had to keep shovelling as we skated as our skating aids started to get stuck as we tried to push them along!

P used milk crates to help him stay upright but, no matter what he tried, he kept falling.  Instead of becoming frustrated though, he made a joke about his situation. He also refused to give up trying. He fell over and over but kept getting back up. He even joined a O, Z and J in their hockey game, offering to play goalie!  Z had brought a hockey puck with him and was happy to share it with anyone who wanted to pass the puck with him.

G grabbed a stick and started saying “pass to me”!  His friends passed the puck to him and he passed it back.  He had never tried using a hockey stick before and, when Chelsa asked him what he thought, he said “It’s Fun!” They continued skating and passing with one another, waiting for the other to get up if they fell and then passing to them once again.

Many of our friends started out using skating aids or milk crates for balance but it wasn’t long before they got up the courage to give skating without them a shot.  I think they surprised themselves as the took slow step after slow step, growing more confident with each of those steps. They fell. But they got back up. It was really exciting for the teachers to watch them improve with their determination and to see them helping one another up when they fell and encourage one another to keep trying!

Off the ice, we got creative with colourful water as we used it to “decorate” the snow.  We started with the snow on the picnic table before heading off to the snow hill to brighten that up a bit as well.  When the bottles were empty, we turned our attention to creative ways of descending the hill as we rolled, jumped and slid down together.

The snowy morning flew by and, before we knew it, it was time to take off our skates and head indoors for lunch.

By Friday morning, we were ready to hit the ice once again.  We had left our skates at the centre in hopes that the weather would cooperate enough to let us get back out there and it did!  In fact, it was a perfect morning for outdoor skating! No snow falling made for easier gliding and the sun even tried its best to come out to say hello. J was very excited to get out there and grabbed his skating aid.  He used it for quite some time before he decided to grab a hockey stick. With that, the aid was gone and he was standing and passing on his own! He fell a few times but, once he remembered to stand up straight, he was set and he was very proud of his accomplishment.  The skating aid was sent off to be used by a friend and he didn’t mention it for the rest of the morning. Seeing this, a few of our other friends opted to trade in crates and skating aids for hockey sticks. While they found it difficult to get up with the sticks, they had a lot of fun practising standing without leaning on something.  Hopefully we will have many more skate days before the warm spring weather comes and melts the ice!