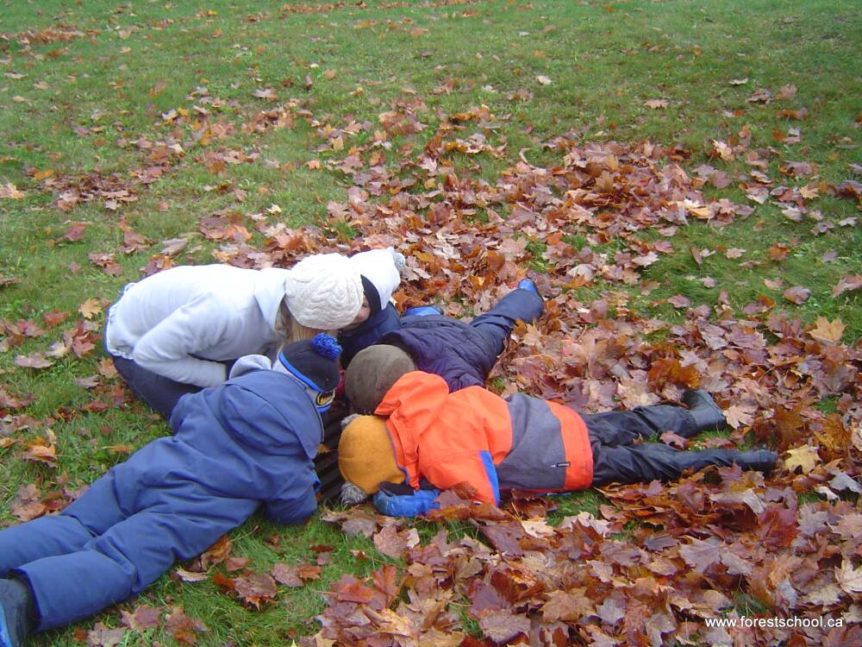 Monday morning we bundled up against a very brisk and very chilly wind.  There were warnings of high wind gusts so we decided to go for a walk about and keep an eye on the wind.  We were worried that strong winds could be dangerous if we were in the woods. Immediately upon entering the trail, we noticed that the entire ground was completely covered with a thick layer of colourful leaves. We began looking around and noticing that some of these leaves were really big so we decided to collect some of them.  We were really excited to share our treasures with our teachers and one another.

A little farther along the trail, we looked way up to see a massive pile of leaves up in the branches of one of the trees.  We talked about why it was there and concluded that it was a nest. Just when when we were trying to decide what kind of nest it was, we were given the answer.  A squirrel popped his out of the nest and and we were pretty excited to know that this was his home. We watched it for a little while before carrying on our way along the trail.

We were surprised to come across a stream in our forest and we wondered about why it was there, how it got there and how it got filled with leaves.  R talked about how the water probably came from the rain and he said that the leaves fell into the water from the trees. We discussed playing in the water as well.  When we recalled the chilly temperature of the air, we recognized that we would be very cold if we got wet on a day like this so we decided to wait until another day to explore the water more completely.

We made our way through the woods, climbing over fallen trees and chatting with our friends.  We happened to see a few more squirrels having a snack in a tree and could hear some chickadees around us before we made our way into the open field.  Here we decided to get silly. Some of us ran, some of us twirled, some of us crawled and all of us were having a good laugh with the wind blowing on our faces.

We made our way to a small hill with some pine trees on it where we all began rolling, one after another, down the hill.  Arms and legs flailed and sometimes we crashed but we didn’t mind at all! We found all sorts of pine needles under the pines and we crawled through them, picked them and even threw some in the air.  We found all kinds of nooks and crannies to sneak into beneath the pines and we decided to play a game hide and seek. The problem with this, however, was that everyone hid, leaving no one to do the seeking!  We had so much fun hiding from view in the evergreens as there really aren’t any of these tree inside our forest. Before long, it was time to gather together and make our way back to the centre together where we played a little longer outside before having a much deserved hot chocolate!

Wednesday brought a damp chill that told us we needed to keep moving in order to stay warm.  We had two new friends to welcome to our Forest School class so, after sharing the silly story “The Feel Good Book” by Todd Parr, we helped to explain the boundaries and safety rules of being in the woods to our new friends. We shared one thing that made us feel good before heading off to explore.

R, N and G headed straight for the hammocks.  They quickly had them unfolded and began working to place them between the trees where they wanted them hung.  As each did this, they waited for the other to have his hammock tied tighter by a teacher. They even tried their own hands at getting the ropes tied tight themselves.  With each visit to the woods, our Forest School friends are becoming more self sufficient and more confident in their own abilities when it comes to the procedures for hanging hammocks.  All three felt great pride in their work but also didn’t mind giving their friends a turn in the hammocks after they had taken a turn themselves.

In the mud kitchen, O, P and J cooked up some “pizza” for sharing, using the scoops, spoons and pans to dig up the dirt around them. When P decided he needed water, the hunt was on.  He knew it had rained very recently so he decided to invite Lisa to check out all of the places he remembered finding water before.

He wasn’t disappointed!  Spoon in hand, he made his way from tree to tree, scooping out water, filling his pan bit by bit.  O came along to help and they found that only certain spoons were effective in certain holes due to the size and shape of both the holes and the spoons. They recovered enough water for their cooking and, together made their way back to the kitchen!

At our meeting area, J.A decided he wanted to do some drawing.  He got out some paper and a clip board and found himself a comfortable place to work.  Z, J and M saw this and thought that making pictures was a great idea! They joined him, all huddled together, to create a variety of different designs.  J.A drew a horse and then a cow and J decided to draw a tree branch. He then stood up and proudly declared “Look, I made a four”! When Chelsa went to see what he was showing her, she saw that, indeed, he had written the number 4 in orange marker.  O and R stopped by to do some creating as well. O made a dolphin while R made a map of “the way you get home”.

R practised using ropes to try to move one of our large sitting logs by sliding the rope under one end before taking the rope around the tree to pull. When the other end kept moving, he asked Chelsa to hold onto it really tight while he continued to pull.  He decided he needed more rope and more muscle so tried tying a second rope to his end and then J came along with an offer to help with the pulling. Their creative idea didn’t work, however, and the sitting log remained in place. We are all very curious, however, to see what other ideas may evolve from this first attempt.  Although we had bundled up well and we were keeping ourselves busy and moving, our toes started to feel the chill nipping at them. We used some wonderful team work to fold and tuck away the ropes and hammocks and we were off to warm up with a hot lunch!

Friday morning we packed up and bundled up and made our way to the forest.  We once again were drawn to the hill outside of our forest site and found ourselves excitedly running up it only tumble and roll back down it, over and over again.  We laughed as we raced each other down the hill in small groups or rolled right over each other as we went along. We enjoyed feeling the sun pop out to see us here and there as we discovered and explored this area for quite some time. Many of us enjoyed huddling together as a family of bears amongst the low lying pines in our “bear cave” together.

At the bottom of the hill, P and D discovered a drainage grate in the grass.  They looked down it to see what was inside. “There’s water down… there and leaves” said P.  Upon hearing his voice echo into the drain, he looked at Chelsa and D with a smile.

They then took turns yelling into the grate “Heloooo down there!” and “Anyone down there?”  Chelsa told them that what they heard was called an echo. They talked about a echo is created by the the vibration of their voices bouncing around off the walls of the drain.  J came to join them and they started yelling “echo, echo, echo” into the drain and laughing at the sounds of their voices.

They wondered how deep it was and then J decided he wanted to put a rock in there.  He and A went to collect what they could find which included some small rocks, some leaves and a couple of small pieces of wood.

They knew their finds had to be small enough to fit through the grate.  J watched and listened as his rock made a “plop” sound in the water before disappearing.  “It’s gone!” he said. “Yes, it sank” said Chelsa. They then threw the rest of the items in, one at a time, watching as the rest of the rocks sank but the leaves and the wood pieces remained on top of the water.  “They’re floating” Chelsa explained.

While some of our friends remained in these explorations for about an hour, others were ready to head into the forest which they did with Karen.  Once at the meeting area, one of the children noticed that the wagon filled with supplies wasn’t in there and wondered what they would do. To this, D replied “Let’s build a treehouse”.  From this, the idea of their “treehouse” evolved and and started to come together. The children worked together to find and then drag longer branches to a decided upon area where they would have to lean them up on a tree to act as the treehouse “walls”.

This proved to be a lot of work and, sometimes the branches weren’t long enough. They wondered how they might be able to use these shorter branches in the construction. R started placing leaves at the top of the branches but they kept falling.  He wanted to use them to make a roof. The solution, after some conversation with Karen, was to use some of the shorter branches sideways, across two vertical branches and wondered how they could get them to stay that way without falling.

When they decided to tie them, they helped Karen to cut twine for this purpose and she tied them up for them.  This became a whole new idea for the tree house, creating “windows” and a different “roof” altogether.

More children joined and each of them found a job for themselves to do to help build the treehouse. C hammered with a stick as her hammer, P placed a heavy piece of wood against the bottom end of a long branch to “stable it” or keep it in place and everyone worked together, sharing ideas about the “couch” they had to sit on and the different rooms within their treehouse. The construction and creativity surrounding the treehouse took us through to the end of our morning and , thus, the end of another week in the woods.