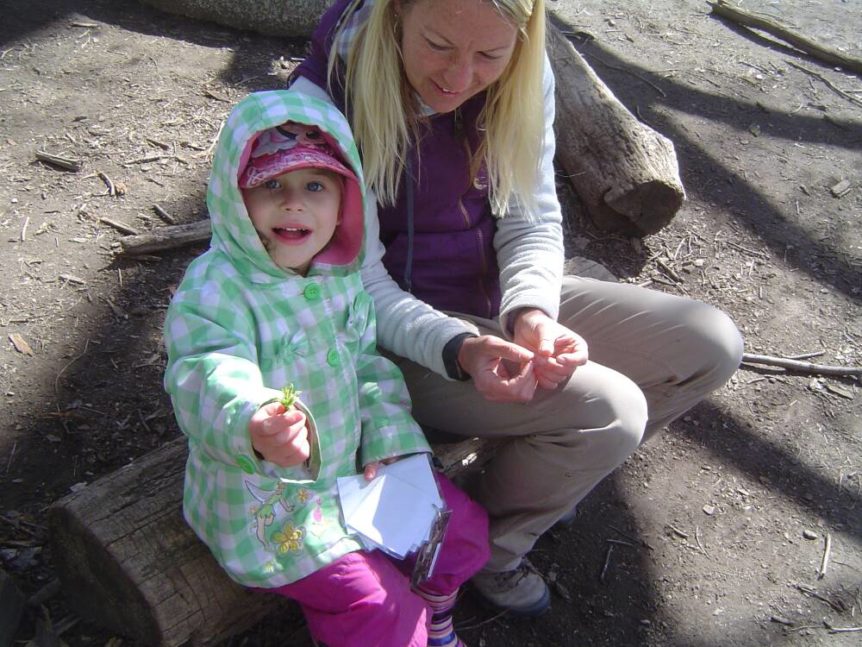 Monday morning we returned to the forest to find something very obviously different right in the middle of our site!  It was impossible not to see or be extremely curious about what looked like a fallen tree right in the middle of our space.  Mother Nature had sent unusually high winds through the area the day before, which caused all sorts of damage to trees and even homes. We were excited to learn that it was safe enough to climb on but discussed some things we should be aware of before we could play.  G mentioned that we shouldn’t go under the tree in case it fell. “It could squish us”. We took a look at all of the parts of the tree that once were up in the sky, but were now right at our level, and decided that the one end which was all broken should be avoided.

We were excited to have something new to climb and to practise our balance on.  The different widths and angles of the new tree encouraged us to use some muscles we weren’t used to using as we walked along.  We wondered where the tree had come from as there were no “roots” at the end we thought was the bottom. Where else could it have come from?  We looked around, but just couldn’t figure it out. R noticed that some of the bark was missing on the tree and there was a smooth spot in that place.  She wondered how it had come off and where it went to. A few minutes later, she, E and C came to Chelsa to show her something they’d discovered. They were holding pieces of bark up against the smooth part of the tree, piecing it together.  Is this the bark that came from that spot? It sure seemed to match and it they had it puzzled together in a way that it very well could have. Another great thing about the new fallen tree/branch was that it offered up plenty of new branches for building with and, as R showed us, smaller branches which were perfect “antlers”.

P was back on the hunt for critters under logs and rocks throughout the site and was soon joined by E and G.  When they worked together to roll over one of our sitting logs, they were delighted to discover all kinds of things beneath.  Worms and millipedes by the dozens! G collected a handful worms and E picked up a small millipede and said “I have a small worm”.  G told her “No. That’s a millipede”. She looked confused. Chelsa asked E to look really closely at her “worm” and asked “What’s different?”  E looked but couldn’t see what was different. Chelsa then asked G “How can you tell the difference between a worm and a millipede?” G said “Worms don’t have legs and millipedes have lots of legs.” He pointed to the very tiny legs of the millipede and that’s when E noticed them. She smiled at what she just learned.

With the ropes out, R decided she wanted to make a “tent”. She went to the bins and pulled out a whole bunch of sheets.  She had help tying a rope between two trees and then spent loads of time meticulously draping the sheets, one by one over the rope.  Her tent was fabulous and she was very proud of it. She allowed her friends to come and test it out and let others help her with the construction and, when the morning was done, she tidied up the entire project herself!

Before heading back to the centre, we still had quite a bit of energy to spend so we made our way out to the field where we ran through the grass and the dandelions, ducking in and out of the pine trees. We shared lots of laughs as we dizzied ourselves by rolling down the grassy hill and then tried to roll back up which proved more difficult.  Finally, we gathered up the hundreds of tiny pine cones we found under the pines. We used our hats as vessels to move them from where they had fallen to a place where, very quickly, we made a huge pile of them. What a team we were! And we were so proud of our efforts that we just had to bring them back with us to our Nature Classroom to use as loose parts!

We spent our Monday afternoon in our Discovery Garden, planting seeds and seedlings.  First we had to get the garden beds ready, which is one of our favourite things to do!  We love taking off all of the straw and pulling the weeds. Then we got planting. Lots of cold hardy lettuces, 2 kinds of kale, spinach, pak choy, swiss chard and peas & beans.  We can’t wait to get tasting!

After getting started in our gardens on Monday afternoon, we decided to share a story about lettuce at our circle time in the forest on Wednesday morning.  We talked about how it grows and all the different varieties of lettuce there are. All the talk about lettuce and salad had our tummies rumbling and we were really happy to finally be having our first snack in the forest this season. We enjoyed chit chatting amongst the familiar spring sounds of our forest together as filled out bellies and got ready for the morning.

As we set out to explore, we were so excited to find that our hammocks had come along with us! G, N and J each grabbed one and set out to find a place to hang them. They noticed that the new fallen tree was right in the middle of one of the desired hanging spots which posed a slight problem.  Where would we hang the hammocks? N and G worked to untangle their hammocks and get the ropes around the trees they wished to hang them from before working with a teacher to get the roped secured. J, however, was a little confused about where his hammock could go. The other trees nearby were too far apart for his hammock to reach. He walked around with his hammock until, eventually, he found a perfect place to hang it at the other side of the site. He was so proud of himself for finding the spot and worked hard to help get it tied up in place.  Before too long, he was smiling wide as he swayed in his hammock in the morning sun which was shining through the trees.

The forest has begun to take on its many shades of green as the tiny plants at ground level get their leaves, the trees begin to bud and even some flowers are blossoming.  We have been really excited to notice the many changes with each visit to the forest and even more excited to investigate what we have found. E got out the plant ID book and C got out the plant ID Tags as they proudly showed Lisa and Karen the different flowers they were finding and identifying using pictures of the leaves and blossoms.  So far we have been able to find Trout Lilies, Blood Root, Trilliums and Carolina Spring Beauty.

Z decided to take another shot at hanging a rope swing.  His past successes had his confidence soaring high with regards to this activity and he readily helps any friend that want to make a swing.  He and R worked together on Wednesday and they had the rope up and over the branch in no time! They even worked together to pull the rope down to where they could reach it before anchoring it to the smaller tree themselves!  They have become very aware of their competencies in hanging a rope swing and made no requests for assistance from any of the teachers!

Our focus on the emerging critters as spring moves forward continued as P continued his hunt for worms. He wasn’t disappointed.  He also happened upon a beetle that seemed to be enjoying the sunshine as much as we were.

Our morning flowed nicely as we took turns swaying and rocking one another in the hammocks, shared the swing, worked together to create in the mud kitchen and took time to draw some pictures at our meeting area.  We even chanced to catch a sighting of our chipmunk as he poked in and out of the branches and brush along the forest floor.

Friday morning was crisp but we couldn’t wait to enjoy a story and snack together in the woods once again.  With our keen interest in the countless creatures we have been discovering, Chelsa thought it might be a good idea to share a story about caterpillars and butterflies. Soon, we hope, we will be seeing some of these different types of critters in and around our forest!

Our independence shone like crazy when we headed off to our chosen areas of interest.  P and N got to work getting their hammocks untied and ready to be hung. Each of them even helped to tie and secure the knots to hold them in place, needing a teacher only to ensure the knots were tight enough to support the weight of the children whom would rest there.

Z had his rope swing rope up and over the branch with just one throw which was strong enough to avoid getting hung up on the branch! He’s so proud of how easy this task is becoming for him and genuinely enjoys getting all set up just for sharing with others who very appreciate this skill of his as they enjoy the swing or wait patiently for their turn  to do so.

Our observation skills have soared to higher heights as well.  C has become very skilled at identifying the flowers around us and enjoys sharing the task with R.  Together they spent some of the morning seeking out newly blossoming flowers and working together to decide which flowers they were by comparing them those they found in the ID guide based on colour and leaf shape.

C discovered something on the ground and curiously asked Chelsa “What is this?” Chelsa replied with “Well let’s take a close look and see what we can find out. They sat together at the meeting area, carefully peeling back thin layers of the tiny object, watching as something green emerged.

They gently stretched it out and that was when C noticed “Its a maple leaf!”. It was, in fact, a very tiny maple leaf that they had helped to peel from its bud. How exciting!

R, in the meantime R went off to share his flower ID book and his discoveries with his friends, J and Z.

Some of our high energy started to come out in a game of tag which started get a little dangerous as we lost our footing and tripped over things in the forest so Karen suggested that we take our game to the field nearby.  We thought this was a great idea! We ran out to the sunny field and chased one another all over the place. The best part, though, was when Michelle became a dinosaur! She roared and chased us as we squealed with delight!

We practised summersaults and collected more pine cones before heading back into the forest where our newly fallen tree branch became a game and a challenge of its own as we bravely walked along its uneven sides, stepping around trees and then, finally, taking the plunge to the forest floor!

With that, a wonderful week of forest school came to a close. We hurried to help tidy up all of our equipment as we were very ready for a hardy lunch!