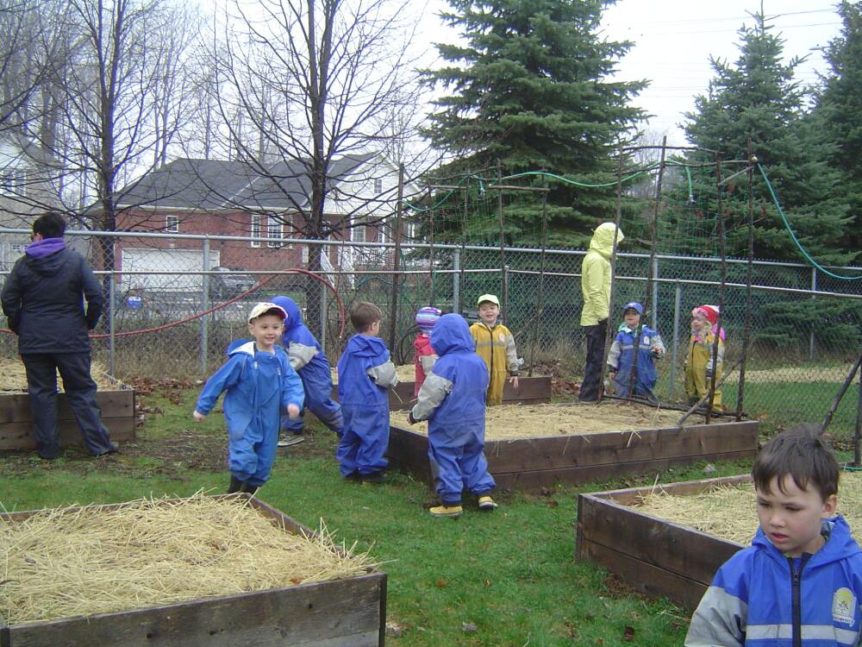 We were really excited to make our way to the woods Monday morning as it was finally time to thank our forest for letting us play there by helping to clean up the garbage that had accumulated there over the winter.  We were a week behind due to the snow fall we had so close to Earth Day but we were very eager to do out part. We were greeted by the sound of woodpeckers calling when we arrived at our meeting spot. With some careful observation, Lisa was able to spot them.  There were three of them atop a broken tree not too far off in the distance and they didn’t seem very pleased to see us. Their call seemed to be more of a warning than a pleasantry and we wondered if this meant they may be nesting nearby.

We decided to get our site cleaned up first and, after talking about what items might go into the recycling bag and which would go into the garbage, we spread out all over the site, looking for, picking up and sorting anything that didn’t belong there.  We made quick work of freshening up our own site and then we were off, to help the rest of the forest.

We wove our way amongst thorny bushes along the field to fetch the snagged trash there before making our way into the familiar trails.

We added some fun to our work as we stopped to check out all of our favourites spots.  We climbed on boulders and logs near our site.

We scoured the trails as we made our way along, noticing that, aside from garbage, there were all kinds of things to find.  Spring had sprung and there were plenty of brand new trout lilies covering the forest floor as well as new sprouts of all kinds. Our forest is finally turning green again!

As we walked, we could still hear those woodpeckers over head.  They seemed to be following us as we made our way through the forest. It seemed they were as curious about us as were about them.

At the “river” we used sticks to fish leaves from the mucky water and practised moving across on a log nearby.

While most of us tried to stay dry, the mud seemed to call to some of us, even pulling our boots to try get us to stay.  We found some garbage around here but we also happened upon a few signs that other living things had been through recently. In some mud off of the beaten path, we found some really great tracks!  Some clearly belonged to raccoons while others were small and indicated a tiny critter had been by for a sip of water from our river.

Just up the trail a little, Karen found something too.  It was lying right by the trail and it was furry. At first glance, it looked like an owl pellet. We decided to take it with us to get a closer look at it.   This was exciting!

We made our way to our hollow log where we took turns crawling through the tunnel it provided.  It took quite a bit of bravery for some of us to give it a try!

With two very full bags of garbage and recycling, we decide to take some time to dissect that fur ball in the sunshine.  We sat on some concrete near the park so we had a flat surface to work, we put on some gloves and grabbed sticks and then we went to it.  We took turns poking through the packed ball of fur, looking for bones or any other signs that would indicate it was an owl pellet.

We didn’t find bones like we had found in the owl pellet before but we did come across something that looked like a claw. We kept it and decided we had some more research to do!

We took some time to enjoy the  warm sunshine as we played in sand at the park before making our way back to the centre for lunch.

Summer like temperatures came our way Tuesday and stuck around for Wednesday. We were ready to go in no time with so few layers needing to be worn and we were excited that the wagon was coming along with us as well. At circle we read the book “A Windy Day in Spring” by Charles Ghigna which was fitting as we listened to and felt a stiff breeze come through the trees throughout the morning.  It had brought some cloud along with it which helped to keep us cool.

There was a small group of curious chickadees who came to check us out when we arrived and we were again graced with the presence of the woodpeckers above us. We couldn’t wait to get to work with all of the materials we had brought along and R and E wasted no time finding the paper, markers and clipboards.  They found a spot to sit and began drawing pictures together.

It wasn’t long before some of their friends joined them. O practised writing the names of his friends while his friends carefully spelled them out to him, J wrote his own name and drew a map on a paper and, later, R spent a very long time practising his name on paper, trying very hard to get the letter “e” just right before practising the letter “v”.

It was so exciting to have our mud kitchen pots, pans and utensils in the forest again.  We dug the soft dirt with spoons, spatulas and tongs and added leaves, found sticks and even rocks to our pans as we created countless varieties of cakes, pies, pancakes and even syrup to share with our friends and teachers who gobbled them up upon delivery.

It was impossible not to see the new growth that surrounded us in the forest as we took note of the trout lilies that are starting to cover our forest floor, the sprouts that are beginning to emerge from the fallen maple keys, the sprouting greenery beneath the logs and rocks we over turn and, most prominently, the small bunch of white flowers that we identified as Carolina Spring Beauty..  We even noticed that the trilliums have begun to come up!

E took it upon himself to plant a seed he had found, hoping he will help it grow into something beautiful.

Before long, our ropes came out and E had plans for a climbing web.  He approached Karen for some help with it and they got to work. This sparked the interest of other friends who made there way over to the ropes.  Some children offered to help while others were just checking on the progress, excited for the chance to spend some energy on the web. Their patience paid off and, before long, it was time to test their balance.  A few thumps and thuds reminded us how tight we would have to hold on to the ever shaky ropes as we climbed but we laughed as we dusted ourselves off and tried again. We bounced and wiggled and made up all kinds of silly ways to hang from the ropes together, taking turns when it got  too crowded.

We spent some time searching for bugs as well.  Z and P were very curious about the types of creepy crawlies that may be lurking under rocks and logs throughout the forest.  Mostly, they were rewarded with the odd big fat worm and all kinds of sleepy millipedes. They did luck out in finding a single, rather large pill bug which was, for them, very satisfying!

Friday morning we spent the morning in our Nature Classroom and we had a LOT to explore, experience and examine.  The rain had soaked everything which touched our senses as even the air smelled like spring. We headed to the garden for the first time since fall and noticed that we will have some weeding to do.  The gardens were still in their cozy straw beds and the garlic was beginning to grow. “Garlic Bread?” asked R upon learning this which made us giggle. I think we know what we will be making when it’s finally time to harvest that delicious garlic.  We took some time to check out the composter. Karen talked to us about what it was and how it worked but we were mostly interested in taking turns spinning it. We moved over to our peace garden and saw that it had a LOT of weeds in it. We sure have our work cut out for us this spring and we can’t wait to get things growing!

We were very delighted to find a small bird hopping around in the area that is the skating rink in winter.  Upon our excited arrival, however, the tiny feathered creature didn’t fly away. Instead it hopped frantically in the other direction.  We guessed that it was injured and unable to fly which also meant it must have been scared. We gave it some space and let it eventually hop away, hoping it would find its way somewhere safe to heal.

The wet weather brought about another little critter as well.  Z found a small snail and decided to show it to all of his friends.  After discussing what snails need to be happy, the children agreed that they would like to bring it indoors to take care of.  This sparked a very brilliant and collaborative project on the part of many of the children. In order to have the snail in the classroom, we decided it needed a living environment so the children collected dirt, some grass with roots attached and a couple rocks and sticks for it to play on.  We talked about how the roots needed to go into the dirt just like where we got it from in order for it to grow and the children shared the task of setting up a living terrarium for what has become a very,very lucky snail. The project took much of the morning and the children even collected some “friends” in the form of worms to add to the terrarium.  We watched in awe as the worms wiggled their way towards the bottom of the terrarium out of view. When it was time to head inside, we were excited to bring our new found friends inside with us!