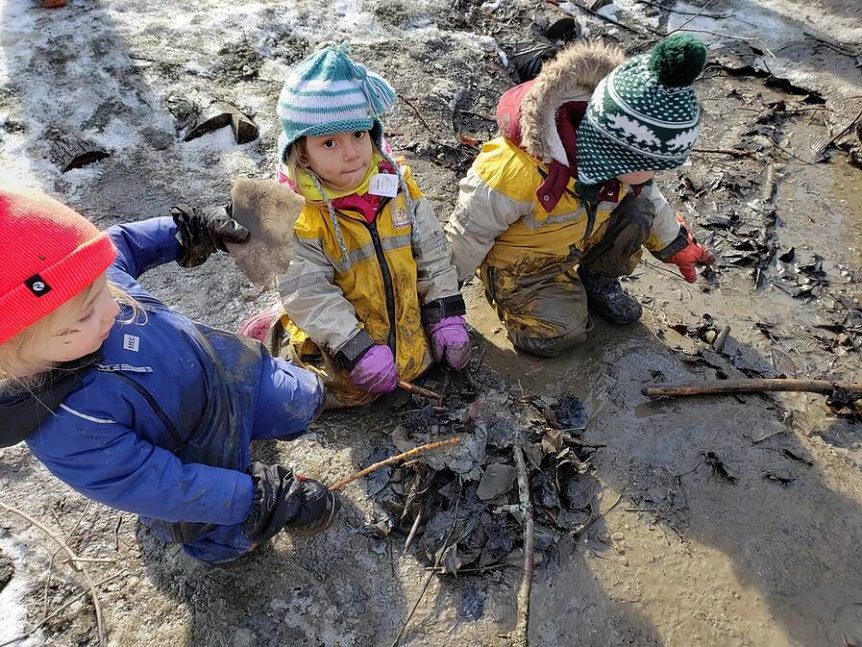 With so much happening in the Forest School program, we have decided to take a stab at “Mind Mapping” together as a way of collecting our thoughts and experiences as they occur within the program both inside and outside the Forest and it has proven to be a fun, inclusive and creative way to bring our recollections of our explorations together as well as to guide us into the experiences that may follow..

In Mind Mapping, information is structured in a way that mirrors exactly how the brain functions; radiant rather than in a linear manner. They map out our thoughts and, in our case, our recollections of our explorations. The maps act as connections to previous experiences and associations which then stimulates further ideas for our learning and explorations to come.

Here is a great example of how this process works for us as it includes the thoughts, experiences and ideas of all children who wish to participate:

After a morning in the forest together where we noticed the children involved in all kinds of things from finding bunny poop and noticing the grass appearing to using ropes to create “traps” among the trees.   We came together at circle to see what exactly was most memorable to the children. We sat together to review what we remembered and, once we got used to the idea, began coming up with all kinds of things we had seen, heard and done with our friends. The most universal way for us to communicate in the Kinder Forest School program is through representation, in this case, drawing. Chelsa started to draw the first parts of the map as the ideas came in and right away the children lit up.  As we moved along, they began to join in, drawing their own experiences.

Sure enough, they had had a VERY busy morning! But, the bunny poop and the traps were there! Later, the children created grander representations of their personal experiences which we posted, along with our map, for all to see.

The following day, the weather had us stuck indoors but we we decided to bring out the ropes in the classroom to see what would happen.  Before long, the classroom was strewn with traps which, we learned from a few children individually, were dinosaur traps. JL created a trap which used a rope to pull a block across the room.  As he wrapped the free end around his arm, it became tangled. This lead to the construction of a “machine”, a tube, where the rope was then tied and used for wrapping.

It wasn’t long before everyone was part of the dinosaur trapping project, taking turns to reel the block in which, eventually, contained a toy dinosaur. While others waited for their turn at the reel, others created an observatory of sorts with binoculars, cameras and walkie talkies all constructed from blocks.

After a break for lunch,  we decided to map this morning as well and here is what the children came up with:

Back in the forest the following day, we had a special guest along with us so we took him for a tour of the woods and, as luck would have it, were rewarded with tracks in the snow and plenty of water and mud in the creek!  There was ice to break with sticks, toes on tracks to count, and chilly water to be mindful of at our feet.

So much to experience and, as we have come to learn, the best way to track it all while being submerged in the the learning ourselves as facilitators, was to map the morning when we got back. This is what the children shared about their morning:

We have decided to take our mapping a little farther, giving each child the opportunity to share their values about their experiences through drawings as well as photos and words.  We noticed that, when placed alongside the map of the morning, these brought the map to life and the entire morning replayed itself on paper before our eyes!

The teachers and the children have grown very fond of the mind mapping process that is now part of our daily routine. It  gives us the opportunity review our time spent together learning in the forest, in the classroom and in the Nature Classroom and introduces our experiences to one another when they don’t happen to cross paths in real time.  Using these maps to recognize what the children seemed to value in their play, we decided to combine their love of the muddy creek with their interest in ropes and trapping bringing some shorter ropes to the water with us on our next forest visit.  The teachers watched as the ropes were inspected, the children surveyed their surroundings and, soon, as the ropes took on a whole new role in their learning. Fishing rods began to be created with ropes and sticks and twigs, bringing knot tying skills to the proverbial table.

The concept of moving water, ice and wood floating as opposed to sinking and the depth of the water being measured were among the valuable lessons that came our way that morning. But the mapping that occurred beyond those experiences shared with us the true value of our time spent together. Bringing to the forefront what is seen, heard and even felt by each and every individual child and to see this through their eyes.

“Nature will bear the closest inspection. She invites us to lay our eye level with her smallest leaf, and take an insect view of its plain.”