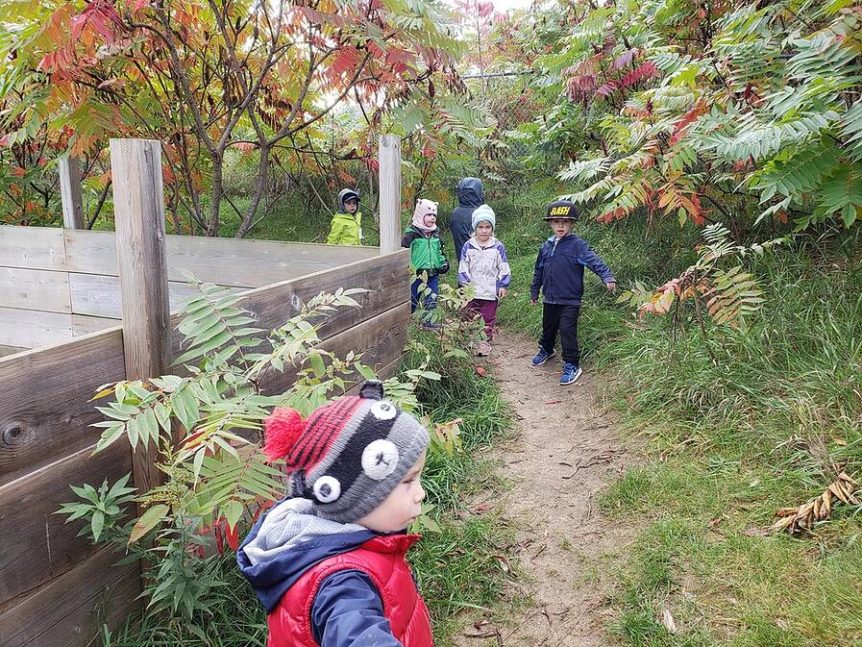 As fall rolled into full swing, our conversations at circle time started to revolve around the changes we are noticing outside and, especially, in our forest.  Everyone agreed that the changing leaves was the most obvious change we saw occurring…well that, and the change in temperature. Our mornings in the forest had been becoming a little chilly.  Looking up into our trees, we posed the question: “What colours are they turning?” and right away we noticed yellow and orange. We shared the story “Autumn’s First Leaf” and decided we should keep our “owl eyes” open to see what other colours we may find.

Back at the centre a  few days later, J noticed our maple tree “The leaves are turning yellow” he said, as he pointed to the changing leaves. Some of our friends went in search of more leaves and colours, walking all around the entire yard, collecting one of each colour as we went along.  E asked “Why do they change colour?” This was food for thought. We decided we should talk more about this with all of our friends.

Inside, we placed all of the coloured leaves on white paper, calling out each colour as we placed them down.  We realized that there were green, yellow, orange, two different reds, purple, a light brown and a dark brown.  We discussed E’s question about why they were different colours in fall. Did you know that the colours we see in fall are the actual colours of the leaves?  We talked about how the sun helps the leaves make food for the tree which is what makes them green. When fall comes, there is less sun so the tree uses up the food in the leaves which takes the green away. The leaves fall off when the food is gone and then the trees go to “sleep” for the winter.

The next day, we made our way back to the forest but first we stopped to see some oak trees that were next to the centre’s property. P had found some of the leaves from that tree in the yard and we determined that they were oak leaves.  We noticed that these were mostly brown but collected some of the yellow ones before continuing on to the forest. Our forest from the outside was a rainbow of colours! We entered onto the now colourful path to find our normally dirt forest floor was alive with colour as well!  Picking up leaf after leaf, we noticed that each was unique up close. They were all so beautiful!

During our walkabout, R started to collect yet more leaves to bring back.  Some of his friends helped and, before long, we had a whole pile to bring back with us.  These leaves found their way to our art table where we worked together to make a fall wreath and some fall garland to decorate our classroom for the season.

R noticed that the line shape of the garland and the circle shape of the wreath could be put together to create some letter of the alphabet by rearranging the two shapes side by side in different ways.  He created a lowercase “p” and said “Look Lisa, I made a p”. Lisa encouraged him to see what other letters he could make and he came up with a lowercase “b”, and a lowercase “d” to which he added “D is for Daddy”.

When Chelsa arrived, he was excited to share his new discoveries. Chelsa asked him if he recognized any numbers as she held up the circle and, after some thinking, recognized a zero.  The garland, he decided looked like the number 1. Chelsa asked what about if the two were placed side by side. Together they counted from 1-10 where he realized that the 1 & 0 were the number 10 when placed together!

We are really excited about a new word we have learned through our leaf investigations as  well. “ Deciduous”, while being a little difficult to say, we learned means trees that lose their leaves in the fall.  Cool! We have been practicing pronouncing this word and have been learning that there are a LOT of different kinds of deciduous trees.  We have seen some of them in our forest and other places we have been, but some were new to us. We used cutouts of all of the different deciduous leaves to create a chart for them together.

We also learned that trees that don’t lose their leaves are “evergreens” because they stay green forever!

When we returned to our Nature Classroom, it was impossible not to notice how many leaves there were on the ground.  They had changed and fallen faster than we had imagined they would. R wondered about making a leaf pile and J.L and S were quick to hop on board with this idea. Chelsa helped to collect leaves by sweeping them into heaps that the children loaded into wagons and wheelbarrows before hauling to the desired leaf pile location.  The plan was to create the “biggest leaf pile of all time ever” and they had lots of help from their friends as everyone came to help move leaves at one point or another. R, JL & S worked continuously toward their goal for nearly an hour before they finally decided the leaf pile was “ready”.

When it was finally done, they were the first to have a turn to jump into the pile, throw the leaves into the wind and to bury themselves. Their friends waited patiently and, before long, were joining them in the “leaf party”. Leaves flew through the air, they were piled high on top of friends and everyone took turns helping one another to get buried. When it was time for lunch, it was difficult to find a head a of hair, a pair of pants or a jacket that didn’t contain at least a leaf or two!

The following Monday, while playing in the forest, Karen discovered two green shrubs, uprooted and just sitting in the “baby trees”.  D and L went to to investigate and noticed that they weren’t growing there. They decided to move the trees together with the intention of making a “volcano” out of them.

With the help of H, they managed to bring the trees out into the open where they noticed that trees didn’t have leaves but had needles instead, which was different from the trees in the forest. Chelsa asked what they noticed and D realized that they “stay green”.  Chelsa reminded them about the “evergreens” they had talked about and D’s eyes opened widely as he said “They stay green forever!” Chelsa asked him if he wanted to share them with his friends at circle and he was excited for the opportunity. He had his friends help him drag the shrubs to our meeting area where he left them for circle time.  At circle, he told his friends all about the eve green trees and his friends remembered about how the needles don’t change or fall off in the fall. J asked an interesting question about the shrubs as well. He pointed to the roots and asked “What are these on the tree?” JL explained that they were the roots and they are the part under the ground.

We talked about how the roots help the tree get water and nutrients from the ground to help it grow and how they help the tree to stay standing. We thought this was especially cool when we compared these roots to the very large ones of the maple trees in our forest. We are interested to see what other evergreens we notice as the season progresses and the deciduous trees lose the rest of their leaves.

With so many colourful leaves on the ground, finding green ones has become rather exciting!  We started to find some green ones on the ground in our Nature Classroom which, naturally lead to collecting and examining them.  We noticed that there were many different shades of green as well as many different shapes. This lead us on a tree hunt as we tried to determine which trees each of the different shapes came from by comparing the found leaves to those that remained on the trees.  Some of them, however, remained a mystery and we figured they must have blown in on the wind from a tree a little farther away.

Leaves have played a large part in our investigations over the past month.  Our interest in their changing colours has brought us to learning about the life cycle of a leaf, the different types of leaves  and comparing their shapes, sizes and different sources. Leaves have set us into motion outside as we have collected, sorted, piled them and played with them  and they’ve lead us through countless learning experiences. It’s unanimous, we LOVE leaves!