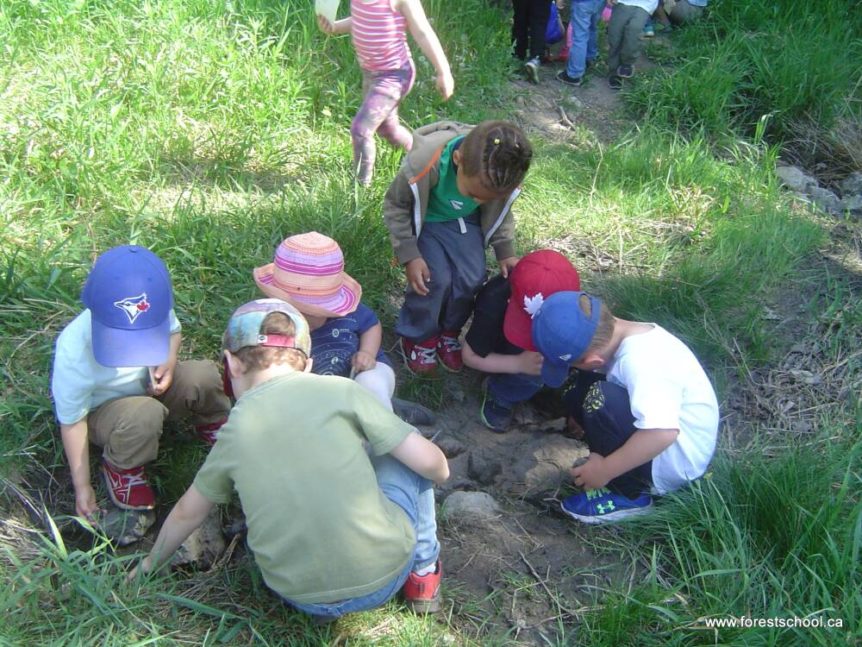 Monday morning we stepped out into the hot, humid sunshine, filled with excitement for visiting our favourite place in the woods.  We wondered what we might see and hear with all of the spring changes we have been noticing. In the field beside the forest we were greeted by a beautiful bunny!  We didn’t notice it at first but we had a little giggle as we saw that it was munching away on some of the many dandelions that, we noticed, had turned to fluffy white seed. Inside the forest, we were greeted by something else… mosquitoes! And LOTS of them! Our circle time and snack time were spent swatting and swiping the little critters as they buzzed around our ears and faces. We were grateful that we had worn our jackets to help protect us! As we departed circle, M was excited to report the first chipmunk sighting of the day!

We decided it would be best to keep moving and to try our best not to shake any extra mosquitoes out of the low foliage around us as we went to explore.  C made her way right to the climbing tree. Up she went, feeling far more confident in climbing skills than ever before. She very proudly called for all of her teachers and friends to see her up on the tree branch perch.

With this, some of our other friends decided to give it a try as well. They surprised themselves with their own strength and abilities as they made their way up towards the branch. Some helped the others by giving them tips and ideas about how to use their bodies to get up onto the branch.  O and P were very proud when they achieved their climbing destination and all of our friends were excited for them, showing so with smiles and cheers.

When the interest in climbing deteriorated a little, C returned with the idea of climbing to the very tip of the branch. When Karen talked to her about the the possibility of the branch not being strong enough, she decided on another tactic.  She walked away but returned with rope. She spent much her time from there, trying to use the rope to help her climb the tree. We are all very interested in seeing where our ropes will take us in our trees!

C and P decided to peak inside the hole beneath the tree nearby where they had seen a toad flee to before. While they waited for quite a while to see if it would emerge, the didn’t chance to see it this time.

We did, however, chance to see a toad a little ways off.  While searching for new flowers near the “tiger hole” R and Chelsa heard something rustle in the leaves.  When they took a closer look, they were happy to see a nice sized toad trying to hide from them. R ran to get Lisa and some his friends and, while they did get to see it before it hopped away, Lisa had a tough time trying to get a picture of it.

The search for flowers turned out to be quite rewarding. R found two of the same type of flower, side by side, that he hadn’t seen before.

He needed the flower I.D. tags and ran off to find them. He had no trouble finding the particular flower as it was very unique and, with some help reading the words, learned it was called a “Jack in the Pulpit”.  How exciting! Off he went again to call everyone to come and see it, proud that he had identified it himself! We were surprised to find another one of these a little later in the morning.

Not far off, at the tiger hole, Z and I were “tigers”.  They claimed their space as their own and decided to work together to build a barrier so that no one else could enter.

When the morning was done, we stepped out of the comfortable shade of the maple trees and back into the sweltering sun.  We were ready to lose a layer of clothing and fill our tummies with lunch.

Wednesday morning, we met outside in the warm sunshine where Karen announced that we would be visiting a different forest!  We headed across the road to the place where we had smelled freshly chipped wood chips and peered into the creek a few weeks before. When we reached the meadow, each of us chose a colour “paint chip” which Karen had brought along and then the hunt was on. Our mission was to try to find things in nature that matched the various colours we had chosen.  Right away, P noticed that his matched the colour of the walking path exactly! This was a good sign that, if we paid attention and looked closely, we might find our own colours as well!

As we moved through the long grass, N stopped to match his card to the grass itself.  The colours were close but not exact so his search continued. P matched his buttery yellow perfectly to the stalk of a bull rush, E noticed that her rusty brown matched the dried needles of a pine tree as we passed and R plucked a dandelion that had gone to seed to show off how closely it matched his off white colour chip.

Our interest in colour matching swayed a a little when we approached what was left of the creek. It was dried up in the first section we had passed but we were excited to find that there was a still a little water remaining. C noticed some tracks in the mud and squatted down to identify them. “A dog” she shouted.  As we gathered around her, we noticed that there were other prints that matched that one and some were even dried into the now solid mud.

Someone dropped a rock into the water and this caught our attention.  Before long, we were taking turns tossing small rocks into the water, careful not to splash our friends.  We listened as the rocks hit the water and noticed the different sounds. There was a different sound between the different sizes of rocks but also in the location where the rocks were thrown in. We wondered if it  had something to do with the depth of the water in different parts of the creek. We decided to practice jumping over the creek a few times before we made our way along the path, through the trees and back to the centre.