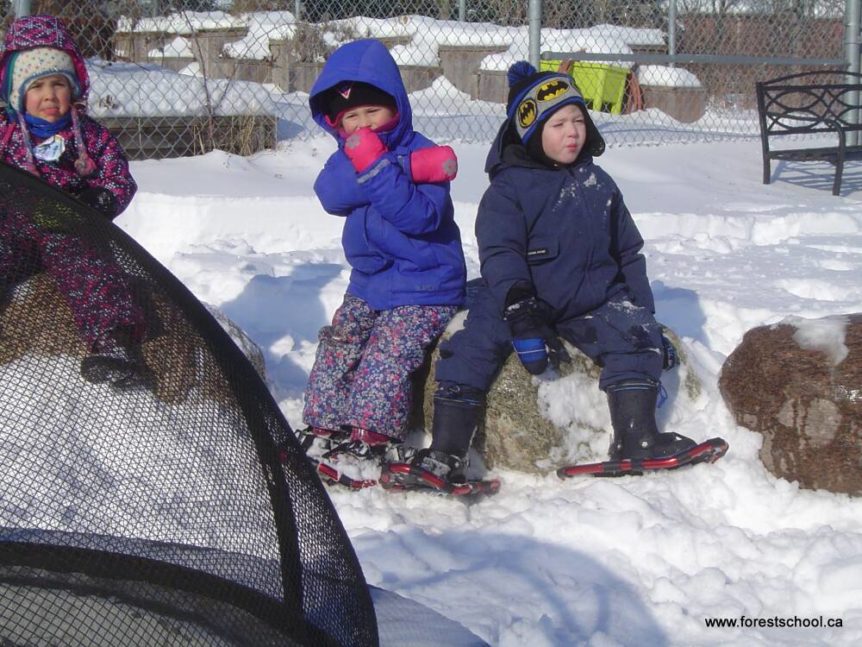 Monday morning we struggled  our way through the falling snow and heaps of fresh snow to get to our favourite place in the woods.  The walk was tiring but well worth the work. As we approached the trail entrance we were delighted to hear all kinds of bird sounds in the tree branches above us.  We stopped to listen and then we looked up to find plenty of chickadees fluttering from tree to tree as they chirped and sang. What a wonderful Monday morning greeting it was!  In the forest we made quick work of digging out our sitting logs which were buried in deep snow before singing a song of our own to begin our day.

We noticed that our structure remained standing but that the paths were completely invisible under the snow so we decided to make paths of our own where we could see that no baby trees were growing.  Our tools for this task, we realized, would have to be our own feet.

M and M went right to work trying to locate the hole they had used for a nest.  They worked away until finally they found a hole. Then, in they went, jumping into the hole they had made in the snow.  They were happy to show P this special place as it was his very first day in the forest with us.

J and J were busy using sticks to make marks in the fresh snow beside the trail.  When asked what they were doing, J said “drawing”. P joined them and then so did Chelsa.  She drew a “P’ in the snow and asked what P might be for. To this, the boys replied with the name of their friend beginning with P.  They practised making “J”s in the snow together with the sticks and then they helped one another to make them. They moved on to making and identifying  different shapes including squares, circles and triangles before J practised making happy faces in the snow. After a few attempts, he was very proud to show off his face making skills to his teachers and friends.

After O joined them in this for a little bit, they moved on to a tree nearby where they sat together talking.  O said “We are off to Elmvale. I live there.” He then pointed in one direction and said to J “Then we can go to your house!”  J replied “I don’t live that way, I live that way.” as he pointed in the opposite direction. They sat together for quite some time discussing where they live and how to get there.

M spent quite a bit of time sprucing up his “batmobile”.  If you recall, he was the original “builder” of the structure that has become shared by all and was originally built to be his batmobile.  He used a stick to remove the snow from the roof, cleared out some space inside and fixed up some of the sticks that had fallen off of the structure.

He was happy to have his friends join him to play as well as to help add their own touches as they worked together to attach ropes to the structure.    The ropes were also shared amongst others as they tied them to one another, tied them to trees and pulled them through snow.

P spent quite a lot of time carefully covering a baby tree with snow.  He said he going to bury it. This started a conversation about how the snow helps to keep some plants warm over the winter.  He thought this was strange because snow is cold. The new word that came up was “insulate” which means it is protected from the cold.   A while later, upon discovering the tree completely yet carefully covered, Karen looked at the tree with a questioning look to which he said “An insulated tree!”  Very clever!

Before we left the forest, we were very lucky to get a few glimpses of a woodpecker in the trees nearby.  It chirped and moved from tree to tree. It also made a sound that we hadn’t heard before which drew the attention of many of us.  Upon looking up, we saw it happily pecking away a tree very close by. It was nice to sit and watch it together, seeing how fast it moved as we wondered what kind of bugs he may be finding in that tree.

Valentine’s Day finally came on Wednesday and we were so very excited to celebrate it with our Forest School friends!  We had something special planned for the day which made the morning even more exciting! The sun was shining and the temperature was fair as we made our way to our fire pit outside where Karen was waiting for us.  We were going to have our first fire of the year so we had some safety rules to learn and practise first! We talked about fire and how, while it is warm and comforting, can also be dangerous if we aren’t careful so we learned how about how to move safely around the fire, that the fire pit area was for calm time and a little about fire blankets that we had nearby and what they were for.  Many of us had had fires with our families while camping or at home and we shared our experiences about this.

While Karen and Chelsa got the fire ready, some of us stuck around to watch how the fire would be lit and to see the flames appear while others went with Lisa and Michelle who helped us get into snow shoes!  Most of us had never tried snowshoeing before and were really curious about them. Some of us noticed that it was a little awkward to get the hang of moving with these things strapped to our feet but C was off and running in no time!

We stuck to the more packed snow in the beginning as it was easier to walk in.  J and G tried to brave the very deep snow near the ice rink but found out very quickly that the snowshoes got caught on the snow each time they lifted their feet to take a step, causing them to trip!  A few rounds of this, lead them back to the shallower areas to play. P, however, found that he could walk on TOP of the snow which he was really proud to share with his friends!

Those of us who chose not to snowshoe, enjoyed making up new ways of sliding down the snow, the bravest of which was on our bellies without a sled.  We jumped from the top, landing in the snow, rolled down the sides and made games of getting back to the top again.

Many of us made our way back to the fire, with or without our snowshoes on.  We could smell the smoke and it seemed to draw us in. We asked questions about the fire,  we sang songs together and we made up fun stories to tell our friends.

Finally, the best part of the morning was upon us.  It was time for marshmallows!! We took turns roasting the marshmallows, remembering what we had learned about fire safety.

Sometimes the smoke blew our way but nothing stood between us and the sweet gooey deliciousness of a freshly roasted marshmallow! Patiently, we waited  for our turns and then waited as the fire slowly softened our treats before we sat down on the fireside boulders in beautiful sunshine to eat them. Our smiles and our sticky faces showed our teachers that it was well worth the wait!

What a wonderful way to celebrate friendship and love on Valentine’s Day!